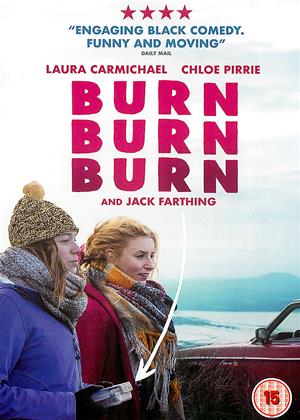 Burn Burn Burn is a heartfelt drama about two female friends who embark on a road-trip to scatter a recently deceased friend’s ashes and come in terms with their own mortality and what means to be alive. Yes it sounds bleak, but it’s written in such a way as to honestly portray the trials and tribulations of two friends who seem to enjoy their togetherness as much as they despise the conformity of modern-day societal norms. What I’m trying to say here is Burn Burn Burn is funny, witty, charming, more often than not dark and understandably so – just like real life is supposed to be; all of the above makes triple Burn a rare gem on its own merit.

The film (directed by Chanya Button) follows two friends, Alex and Seph (played by Chloe Pirrie and Laura Carmichael respectively), as they find themselves in a rather peculiar spot: their dear friend Dan (Jack Farthing) has died, but before parting from this world, he has also made a series of films intending to speak to Alex and Seph from the eternal pastures and beyond. Thus, their ultimate goal is to visit key places from Dan’s life pertaining to his short films and leave some of the ashes to those exact places as per Dan’s last wish. Little did they knew, this trip would become more about themselves than Dan, as the majority of Alex and Seph’s realizations stemmed from within rather than be triggered by external stimuli. Or in other words: our thoughts are what we are.

As said, Burn Burn Burn is a heartfelt little film that works more as drama than comedy, as its comedic moments are few and far between whilst also being scattered all throughout the narrative structure of the film. However, when these comedic moments DO happen, they represent the hallmark of triple Burn, and consequently, showcase real life in its purest form (which makes the whole ordeal charming, if not downright cool). And so, personal discovery has never been more personally depicted as in Burn Burn Burn, which is refreshing to say the least.

Additionally, as these two misfits’ journey comes to a close (Alex and Seph), their personal discovery nears its end as well – pointing them to sudden realizations to questions they never knew they had in the first place (being purposefully vague here in order to avoid spoilers). To this extent, triple Burn’s dramatic effect comes rushing in before the audience can manage to settle emotionally, and so the cathartic effect becomes one of whimper, rather than a bang.

Finally, Burn Burn Burn is a hipster-free indie feature that asks more questions than it answers, and if this sounds like your cup of tea, then by all means feel free to watch it. That simple.