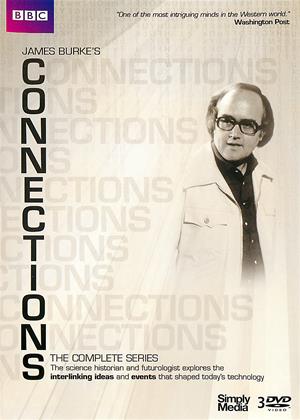 Synopsis:
How did the nautical instruments of Elizabethan times give rise to the atom bomb? What links Britain's textile mills to the Information Age? And how did exploding billiard balls usher in an era of mass media entertainment? In this landmark 1978 documentary series, James Burke examines the surprising connections and happy accidents that led scientists to discover and develop the key technologies of our time.
With mighty intelligence and sharp wit, the former Tomorrow's World presenter turns science into a detective story, leading viewers through 12,000 years of history to find the vital clues that would spark life-changing inventions in telecommunications, plastics, film and TV, jet propulsion, nuclear fusion and personal computing. Explaining the 'trigger effect' of ever-accelerating advances in technology that leave us dependent on increasingly complex networks, he predicts a future world in which radical change in the availability and use of information will be needed if we are to remain in control of our societies and systems. A brilliant and enlightening account of how seemingly disparate scientific innovations mesh together to produce extraordinary and unforeseen technological advances.
Actors:
James Burke, Mark Wing-Davey
Directors:
Mick Jackson
Producers:
Mick Jackson, David Kennard
Writers:
James Burke
Aka:
James Burke's Connections
Studio:
Simply Media
Genres:
British TV, TV Documentaries

Connections is an absolute marvel in filmmaking (or series-making for that matter) that pulls of wondrous “connections” between seemingly distant events that led to the eventual creation of something much more profound than the event that inspired its creation. And hence the name: Connections links both early and late 20th century technology to historical events that unraveled way before anyone could predict how tech could change the world. And so, such examples provide a time machine to the 14, 15, and 16th centuries in order to explain how different tech came to fruition, such as the limelight (used to illuminate theaters in the 19th century) happened thanks to a schism on Henry VIII’s part from the Catholic Church way back; or that of a type of tar that led to the creation of an innovative fertilizer; or even the connection between nautical technology from the 16 and 17th centuries and the nuclear age in the early 20th century. These are just a handful of examples that Connections puts forth (mostly owed to the amazing presentation by James Burke) and it would be most certainly remembered as one of the best science shows of the 20th century, standing alongside giants as Carl Sagan’s Cosmos or Laurence’s Olivier The World at War.

This show is simply amazing. And although one could argue that Connections overuses the butterfly effect to showcase how a trigger event led to a seemingly different one, this would not be the case; Connections not only bridges the gap, but it also provides historical context through a mesmerizingly (and sufficiently researched) presentation via a unique approach of non-linear thinking. So, instead of citing a preordained product without context, the show takes myriad historical reasons, carefully dissects them (even outright rejecting some), and gives the viewer a thorough end-product (both figuratively and literally) as food for thought. And perhaps Connections is also unique insofar its writings are concerned: there are no dumbing downs for the sake of appealing to a wide array of audiences, nor silly PC interpolations just for the sake of involving certain minorities, genders, or what-have-you. Connections tells it as it is and boy do I miss those good old days (not that I’ve been there to witness it, but still).

Not that Connections is always innovative in its approach; the show uses a pre-ordained structure that often starts in the Middle Ages and continues onward. But this approach serves well in context, and it actually helps to understand better what the heck was going on back there and why civilization even bothered of progressing further when death and decay was almost inevitable (not as bleak, but rather my assertions). Well now we know why: because humans are ultimately explorers, and this venture into the unknown is what brought us logical games, light-bulbs, television, and jumping forward – things such as the Internet, machine learning, and more (not present at the time of filming).

Finally, Connections is some of the best documentaries out there, and that’s just a simple fact.