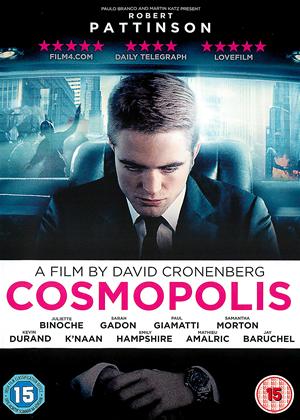 Sign up
Ghost Dog: The Way of The Samurai

This film is just dreadful: clealry filmed in studios mostly in close-up (justifiable for new directors who can't get funding for location shooting, but maybe not for experienced ones showered with state funding from Canadian taxpayers).

The novel is by a good writer who writes intelligent novels. It is such a shame that what is probaby a decent book has been ruined so much by an up-himself director who really is not as clever and talented as his thinks he is.

A turkey. Not even interesting in an arty way. Just pretentiouc and dull. You might as well turn the pictures off and juts listen to the repetitive tedious badly-written dialogue, because that is all the movie is: words words words, signifying nothing.

Watch MARGIN CALL if you want to see a really decent film about the financial crisis.

Oh Cronenberg, why hast thou forsaken us?

So unutterably shit I switched off 40 minutes in. There will always be something in the back of my head saying 'Maybe if you'd watch it all the way through you may have loved it'. Maybe. Maybe one day when I am paralysed in old age, sitting in front of a television seeking entertainment for the final years of my life I will return to it, but only after I have watched every Adam Sandler movie first.

It is that bad.

OMG I challenge you to find a film that is either more tedious or more up itself. It achieved the rare status of 'film I couldn't finish.'

The levels of excrutiating agony produced by faux intellectual dialogue were typified by the now immortally effluent line, "You absolutely reek of sexual discharge!"

My advice to would-be viewers is to rent this film only if they have insomnia and even then to turn the volume off!

A surrealist homage to the already surreal 1927 masterpiece Metropolis Cosmopolis is a more modern look at the distorted world of capitalism and gulf between the rich and poor, the righteous and the self indulgent. Comparing these two movies does a great injustice to Fritz Lang’s depiction of a future world inhabited by slaves and over lords, as Cosmopolis is in fact, beneath the philosophy and sex, little more than a pretentious series of bizarre dream sequences that allowing Robert Pattinson the chance to explore the full range of his wooden and expressionless acting style.

Pattinson plays 28 year old billionaire Eric Packer, who completely on a whim chooses the day of the Presidential visit to Manhattan to travel across the city in his vast white limo simply to get a haircut; and from the very opening moments we are thrown into the utterly inane and decadent world of this obscenely rich.

Whilst working his way at a snails pace across the city Packer is visited by various – largely female – people from his life, most of which he seduces and many of which he has exquisitely painful and obsequious conversations about the meaning of wealth and existence in the modern world. The sex and so-called philosophy meet and intertwine like a mass of blood matted hair at times, such as when his girlfriend (played Juliette Binoche) writhes against him whilst asserting that “life is too contemporary”, the opinions of the male characters epitomised by a conversation between Packer and his finance manger over a prostate exam.

The impressive cast does little for a narrative with absolutely no soul whilst the surrealist elements, rather than being thought provoking, are distracting and distant rather than join the audience and main character. Visually the film is expressive and strangely captivating, though like so many beauty queens it can not fulfil on an intellectual or emotional level.

Perhaps things wouldn’t be so bad if the dialogue did not seem so forced and stilted. Very little of what is said, though “proclaimed” would be a more suitable phrase, is particularly interesting or foundation shaking. In fact I was rather relieved when protesters outside the sanctuary of Packer’s mansion-like limo, turn to violence, though even this results in a fairly unsatisfying ending.