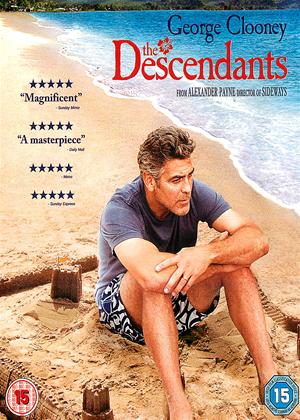 Reviews (1) of The Descendants

George has trouble at mill - The Descendants review by NC

Fairly predictable, but well done, and not without some humour and good acting here and there. Rolls along quite competently

From the maker of Sideways and About Schmidt comes the now Oscar winning The Descendants the story of a lawyer forced to return his attentions to his family and home life after an accident leaves his wife unconscious in a hospital. Far from being the story of a family reunited by grief The Descendants is a bizarre, funny and often toe curlingly cringey story about alienation and parenthood.

With George Clooney in the leading role as Matt the distant husband and father, The Descendants has an awkward, difficult and hugely enjoyable first half in which Clooney discovers his now comatose wife has been having an affair and was planning to divorce him. Enraged Matt goes in search of his wife’s lover, dragging his two daughters along with him.

The first half of the movie is surprisingly emotive; depicting the strained and somewhat fractured relationships between a man and his teenage daughters with a level of insight that many only gain through years of therapy. His daughters, played brilliantly by Shallane Woodley and Amara Miller, are also multi-faceted and more importantly believable characters whose different ways of dealing with grief give their father quite the run for his money.

Fans of Alexander Payne’s earlier movies will fully expect the often painful and ludicrous comedy that spans the runtime, although it is not to everyone’s tastes. The humour is lost on some, whilst others are liable to find it simplistic and predictable, those who like Payne’s particular brand of humanist fallibility will not be disappointed however.

Any and all audience members may be a little let down by the movie’s second half, which takes on a rather dragged out guise as Matt and his family (and other unlikely tagalongs) scour a Hawaiian suburb for his wife’s lover. This part of the movie also includes a rather badly composed scene in which one of the more insipid characters is suddenly revealed to be a deep and sensitive soul underneath the over zealous sarcasm, yet things eventually seem to fall into place when Clooney finally encounters his new nemesis, only to behave in a distinctly un-Hollywood fashion and find himself returning home, his family in tact.

The Descendants is a good movie, with the emotional depth and strength of script to aspire to the realms of greatness, it’s latter half however lets it down leaving it as an above average comedy drama.