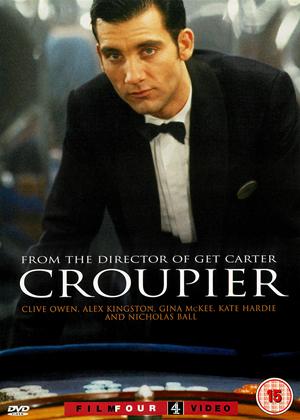 Mike Hodges directed the classic Brit gangster film 'Get Carter' - and here he is again, directing another low budget Brit (although, other than a few scene-setting location shots, filmed in Germany) classic film noir, this time starring Clive Owen.

I have always found Clive Owen to be a 'wooden' actor yet here his impassive face is perfect for his central role as a croupier in a casino, observing the punters as they inevitably lose their money.

Clive Owen plays aspiring author Jack Manfred, under pressure from his girlfriend who sees herself living with a successful author. Just for the money, he gets a job as a croupier at a London casino - he's had experience of the job while in S Africa - and uses his observations of the other staff as the basis for a novel. He is approached to be the 'inside man' for a bungled heist, his girlfriend is killed in a hit-and-run accident, and there is an ambiguous ending. But throughout it all, Jack / Jake (the protagonist in his novel) keeps a detached view on the gambling world and its losers...

It's not a thriller, it's quite slow moving, there's no crash-bang-wallop (there is a little bit of violence and mild sex scenes), and the attempted heist is a very minor part of the story. But the atmosphere and the cool, over-calculating presence of the perhaps unnaturally detached central character, Jack / Jake the croupier, is quite remarkable.

[Aside: Mike Hodges also directed Clive Owen in the slow-moving, atmospheric 2003 Brit gangster film 'I'll Sleep When I'm Dead' - that's another of those films you either love or hate. Me, I quite liked it...]