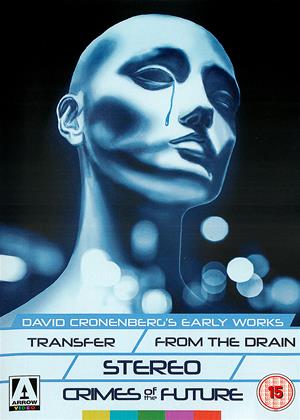 Synopsis:
One of the most singular auteurs of the horror and science fiction genres, David Cronenberg has wowed audiences with his depictions of body transformations and explorations of society, this collection of his early short and feature films shows a master learning his craft and exploring many of the themes that would dominate his most celebrated work. "Transfer" (1966), Cronenberg's first short film, is a surreal sketch of a doctor and his patient. "From the Drain" (1967) finds two men in a bathtub, which may be part of a centre for veterans of a future war.
"Stereo" (1969), Cronenberg's first official feature film, stunningly shot in monochrome, concerns telepaths at the Institute for Erotic Enquiry where patients undergo tests by Dr. Luther Stringfellow. In "Crimes of the Future" (1970) Cronenberg worked in colour and with a larger budget, where we find the House of Skin clinic director (Ronald Mlodzik, returning from Stereo) searching for his mentor, Antoine Rouge, who has disappeared following a catastrophic plague. Cronenberg's early amateurfeature films, shot in and around his university campus, prefigure his later films' concerns with strange institutions, male/female separation and ESP, echoing the likes of 'Videodrome', 'Dead Singers and Scanners'.
Actors:
Ronald Mlodzik, Jon Lidolt, Tania Zolty, Paul Mulholland, Jack Messinger, Iain Ewing, William Haslam, Raymond Woodley, Stefan Czernecki, Rafe Macpherson, Willem Poolman, Don Owen, Udo Kasemets, Bruce Martin, Brian Linehan, Leland Richard, Stephen Zeifman, Norman Snider, William Wine, Kaspars Dzeguze
Directors:
David Cronenberg
Producers:
David Cronenberg
Writers:
David Cronenberg
Aka:
Transfer (1966) / Stereo (1969) / Crimes of the Future (1970)
Studio:
Arrow Films
Genres:
Comedy, Sci-Fi & Fantasy
Countries:
Canada

As a big fan of David Cronenberg, especially the earlier body horror films, I had long been interested in watching this compilation of his early works. I had considered buying it on several occasions - thank goodness I just chose to rent it, as it is hard to imagine anyone in the world, even the most ardent Cronenberg worshipper, wanting to watch any of these twice.

'Transfer' and 'From the Drain' are short films Cronenberg made as a student which possess no merit or interest whatsoever.

'Stereo' and 'Crimes of the Future' represent a bridge between the early short films and 'Shivers', which I would still consider to be Cronenberg's first true feature film. Both were shot silently due to the cameras being too noisy to record sound at the same time. Stereo has an added narration from multiple voices (to say multiple 'characters' would be putting it too strongly I think), whilst COTF has a narration from the main protagonist as well as occasional sound effects and odd bits of music. In each film, the narration hints at intriguing ideas, many of which would be explored in Cronenberg's later features. Unfortunately the visual elements of both films, whilst showing a sharp eye for striking compositions, are abstract and desperately dull. The running time of each of these films is only an hour but both feel much, much longer.

Film critic Kim Newman, writing about Crimes of the Future, couldn't have put it any better when he stated it was "more fun to read about in synopsis than to watch" and that it proved it was "possible to be boring and interesting at the same time".