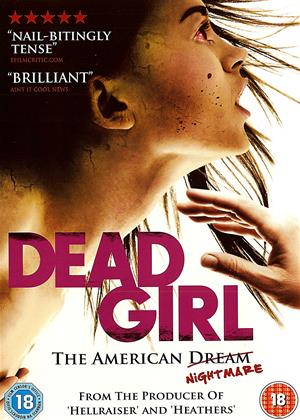 Seriously unwholesome - don't watch this one with your granny! - Deadgirl review by RP

It's worth outlining the storyline of this film so that you're aware of what you may be about to watch:

Rickie and JT bunk off their high school class and go exploring the basement of an abandoned psychiatric hospital. They discover a naked girl chained to a table, more dead than alive. Over the next few days/weeks, JT and his mates then proceed to use her as a sexual object and subject her to assorted physical abuse, discovering that she cannot be killed. Rickie saves his attentions for his childhood sweetheart JoAnn, but gets nowhere until she is bitten by the girl, who is (of course) a zombie.

This is a seriously unwholesome film - but it does contain some interesting ideas. It's not a horror film - there are a couple of gory bits, but it's not too over the top and there are only a couple of quick shocks. It's not a rape/sex film - while it's quite obvious what's going on, there isn't anything too explicit. There are also episodes of humour - the filling station scene being the obvious one - and there is a lot of f-ing and blinding.

I suppose it could be classified as a stereotypical coming-of-age / rites-of-passage film - it has the central nerdy, introspective character (Rickie), an unattainable love interest (JoAnn), a confident, outgoing character (JT), a love rival high-school-jock (JoAnn's boyfriend, Johnny), and a central event which brings all of them into contact and conflict. But perhaps that's over-analysing it a bit too much...

It's a low budget production and it shows - the sound on the DVD is very muddy and the acting varies from the very good (even 'deadgirl' is good, despite not saying a word) to the very bad, and given the budget, good use is made of the location.

While I can't say I 'enjoyed' it (I don't think I'm yet ready for zombie sex) it does give a new twist to the same old, tired old zombie / undead genre so I'll give it a fairly high rating.

4/5 stars - just don't watch it with your granny, and keep it out of reach of the kids.