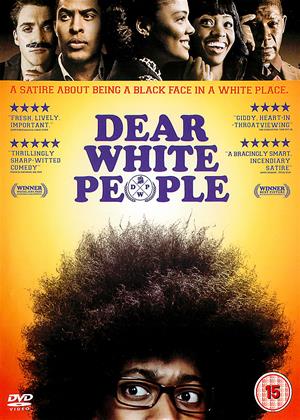 Bit of a reverse racial thing. Students appear to spend all their time mooching about, and organising parties, rather than at classes, but maybe that is how they are in the States............

From Sam's opening "Dear white people, the minimum requirement of black friends needed to not seem racist has just been raised to two. Sorry, but your weed man, Tyrone, does not count.", this is a terrific movie. It's fast moving and very funny but also extremely thought-provoking, choosing to highlight racism and issues around racism in a new and intriguing way.

Not meant for my generation - Dear White People review by AM

I first heard of this film on Radio 4's Today programme. The news item was that this film, which had gone down well in America, had failed to find a cinema distributor in the Uk and looked destined to go to straight to DVD at best. The inference was that the UK film industry was failing to serve the black community in the UK, and indeed, failing to see how this film would appeal to a wide audience. The programme played some clips which made the film sound very, very funny so it was duly added to my list of films.

To cover the news angle first, there is no reason why this film shouldn't have had a cinema release. It's no better, or worse, than many films I've been forced to sit through in the past. It reals with the racial issues it seeks to highlight in a fairly straightforward, out of the box way, without ever threatening to become thought-provoking or original. But there are buts, and here they are. I'm not the target audience, not because of race, but age. I'm in my forties, and I stopped habitually watching films set in US colleges twenty plus years ago. The acting is wooden, the script plodding. Ultimately, it's just not very good.

Dear White People is not so much a film about racism as it is one about identity. It doesn’t seem so at first as the movie opens spoiling the climax of a race-related fight that occurs at a fraternity party. The movie then cuts to African American student Sam White hosting her radio show entitled Dear White People. She spouts off rants about how the proper number of black friends a white person needs to have has increased and how it's immoral for white women to be dating black guys to piss off their parents. Already we’re told about the explosion and revealed an open flame, but what transpires is anything but the expected.

The movie follows four black college students at an Ivy League university struggling to find themselves. Sam White seems to know her path with her racially motivated radio program and reverse-racism film version of The Birth of a Nation, but several emotionally draining events drop on her doorstep. She applies for a fraternity president election simply to stir the pot, but is a deer in the headlights when she actually wins. She has a white boyfriend, but their relationship clashes when Sam starts drawing battle lines for a race-based campaign. And there are problems with her parents that pushes Sam incredibly far down emotionally.

Coco is a female black student who wants to land her own reality show, but finds the black producer would rather examine someone more radical. Jealous of the attention the producer gives Sam, Coco sets off on the artificial path making YouTube argument videos against Dear White People and becoming far more sassy than she normally acts. She achieves her goal of attracting more attention, but perhaps not the kind she was seeking. Reggie is the son of the school dean and faces the typical pressures of living up as an example to his father. He struggles to make his way in with the whitest and wealthiest as his dad doesn’t want to see his son become another stereotype. All Reggie wants to do is write jokes and try to relax with some drugs, but does so in private for fear that he’ll fall from the highest peak.

But the most interesting character we follow is Lionel, a gay black student still trying to find himself. Kicked out of fraternity after fraternity, shunned for his nerd status and touted for his homosexuality, Lionel finds some comfort in a magazine editor who loves his writing. But as he soon finds out in his many meetings, the editor and staff seem to really only be interested in him as more of an idea than a human being. He tries to remain on the sidelines of the heavy issues batted around campus, but it grows incredibly frustrating to put up with the labels and misconceptions quietly assigned to him by others.

This is the first feature film directed by Justin Simien and it really stands out as a first-rate project with real characters. I have never seen college students portrayed in a film with this much emotion and intelligence. These are students who have ideas, wit, humor, determination, uneasiness, vulnerability, passion and every other emotion that makes us human, but seems to be lacking from any other depiction of college in the movies. The love scenes in particular are brilliantly shot in the form of shadows and pillow shots of the bedroom. The silhouettes of two individuals in each others arms, the ripped open condom wrapper on the bedside table and the bra straps resting on the floor. It makes these moments far more intimate rather than just being a silly romp through the bed sheets.

Do not be turned off by the sharp title of Dear White People. This is not an us-versus-them movie where black people are rationals and white people are devils. It explores a new form of racism that is not so blatant to recognize and even harder to quell. The movie ends with real photos of racist parties at colleges where white students masquerade in black-face, gold jewelry and baggy clothes. Racism is a force that cannot simply be extinguished just because all the big targets were shot down. Since the film is this open about the subject and its characters, it makes the bits of comedy honest and that much more hilarious for being so challenging.