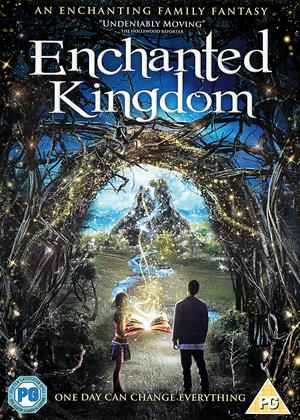 This movies as a strong Christian message. - Enchanted Kingdom review by mb

I got so bored that I couldn’t finish to watch it.

It could be OK if you have very young children, pre-teen and if you have some religious believes. It is cheesy, little predictable and perhaps not for everyone.

Enchanted Kingdom is an apologetic Christian piece of cinema that should be presented as such (not cloaked in a nice warming layer of “fairy dust”). Not that you can’t enjoy Enchanted Kingdom on your own, especially for all the devoted Christians out there (mostly Catholic Christians) – but this alone just won’t cut it for individuals looking a way to escape daily ordnances, politics, and especially religion. Take this as you will and try Enchanted Kingdom on your own, but don’t come back complaining to me if you’re left with a bitter taste in your mind…I mean mouth.

The film follows the stories of several characters who, surprise surprise, are all led to the “righteous” path by Christian Catholicism, whatever the meaning of that word entails. And so, we have The Good Man (played by Drew Seeley), the cool guy who is devoted to Jesus but for some reason comes off weird if you encounter such a dude in real life. Then, the Little Girl (played by Ashley Boettcher), who is undeniably devoted to the Christian ways of life. Notice a pattern? Even in the naming of its characters, Enchanted Kingdom interpolates esoteric threads that are weird, bizarre, and something that 16-year-olds often come up with when they’re bored in math class.

Additionally, Enchanted Kingdom features a separate story wrapped up in a Disney-styled animation that propagates the meaning of Christian faith even further. I mean, it’s apparently obvious that the filmmakers (director Carl Lauten and writer G.P. Galle Jr.) put all of their cards on display and unapologetically try to steer young people into Christian doctrine. Which is ironic cause they themselves end up being Christian apologetics, if anything.

The main problem I have with this film is that, unlike most Catholic Christian followers, it tries hard to emulate what an alien would think of Christianity if they landed on Earth exactly at this precise moment in time. It’s like a third derivation of a known equation, but with glaring errors; or a façade of a house that is about to fall apart; or even better – like that time when you were in a hurry and sprayed yourself with sufficient amounts of perfume to avoid the necessity of showering. Yup, Enchanted Kingdom makes a disservice to Christianity, its followers, and good people who want to live their lives and differentiate between spirituality and dogmatic doctrine. Which are all of us I could only presume. And at some point in time, the film becomes borderline creepy and starts teetering on the verge of thrilling horror – not quite what the filmmaker’s intentions were.

Finally, does Enchanted Kingdom have any redeeming qualities? Well, that’s a very good question which needs not answering. See it for yourself and god bless you.