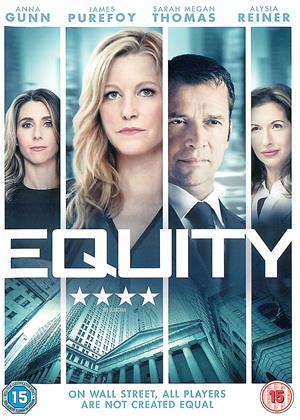 For me this film lacked any real story. I would not suggest you see this film unless you are a real fanatic about the actors or high finance

This is an awful film. It is short but feels long, It is dull and boring. Moreover it is totally sexist - thew few males characters are all cartoon baddies (all except a token old goodie man in the prosecutor's office). One real issue is that the main character is such a vile, nasty, greedy, selfish, horrible amoral woman that we do not care what happens to her - no matter how bad. The other women are often just as vile.

Watch WALL STREET or the wonderful MARGIN CALL or some other movies about finance. Good movies. Unlike this trash.

This is very badly written, unrealistic, misandrist (sexist against men), with much whining and whingeing from women who claim constantly how much harder everything is for them. Nope, not true - I may sympathise with these vile bankers' cleaners but not with them! Ever. Watching the horrible self-serving women - and men - in corporate finance here is not only irritating but makes me sympathise with anyone who wants to come down hard on that greedy corrupt world.

Some massively sexist nuggets of dialogue here - in one scene, the main character says 'you men don;t do that, do you?' when she is worrying. Oh no, men never worry - ever, Life for them is so easy peasy they never have any worries at all. Maybe that's why 85% of suicides are male and every day up to 15 men kill themselves - because they have it so easy.

A vile, sexist, pointless mess of a film - badly written for a start, so amateurish with the pity party femi-whingeing.