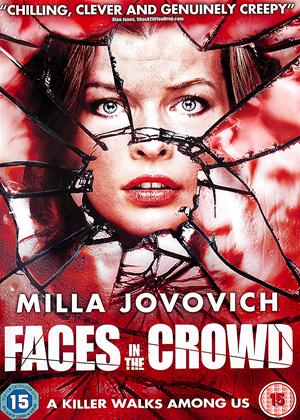 Reviews of Faces in the Crowd

Faces in the Crowd review by Melissa Orcine - Cinema Paradiso

Prosopagnosia or ‘face blindness’ is a real illness where the brain is incapable to recognize and distinguish faces. Basically, you see people and even if they are not strangers to you, it doesn’t matter – you won’t know. You can’t differentiate between friend and foe, and that, is a more frightening thing.

‘Faces In The Crowd’ is a psychological thriller starring Milla Jovovich, she plays Anna Marchant, a schoolteacher who suddenly experiences face blindness after accidentally hitting her head. She had just witnessed the serial killer Tearjerk Jack assault another one of his female victims. Tearjerk Jack knows Anna did but even with her current state, and he cannot be sure that he can get off the hook that easily. As Anna tries to regain her ability to recognize faces and put names on them, she is also being haunted by the serial killer, making ‘Faces In The Crowd’ a thriller worth checking out.

Or is it really?

As a concept, using face blindness as an important detail in a psychological thriller bordering on horror flick is ingenious. But still, ‘Faces In The Crowd’ disappoints. Milla Jovovich overacts in every scene, particularly her waking-up-from-a-coma sequence where she truly freaks out. My take is: If you’re suddenly afflicted with face blindness, you would have to fake it to make it. Meaning: I can’t recognize faces – I should be discreet about it. I would be ashamed to admit that I’ve lost the ability to know people. And Jovovich’s portrayal is a major freak-out each and every time, not letting up, and hysterical through and through.

‘Faces In The Crowd’ also discards the exciting element of a serial killer on the loose, now stalking Anna (Jovovich). If the film makers were clever, they would have capitalized on this twisted cat-and-mouse game and yet, face blindness becomes the center of the story – plot be damned. In fact, a little romance is even injected. Anna becomes entangled with the detective (Julian McMahon) on her case, and you know, sparks.

A good effort from director Julian Magnat but ‘Faces In The Crowd’ screams straight-to-DVD at the get-go.