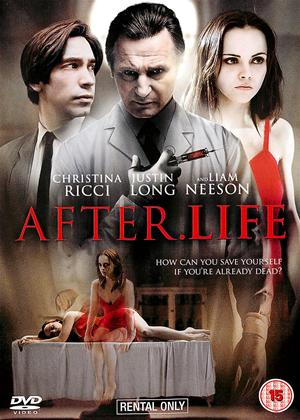 Synopsis:
After a horrific car accident, Anna (Christina Ricci) wakes up to find the local funeral director Eliot Deacon (Liam Neeson) preparing her body for her funeral. Confused, terrified and feeling still very much alive, Anna doesn't believe she's dead, despite the funeral director's reassurances that she is merely in transition to the afterlife. Eliot convinces her he has the ability to communicate with the dead and is the only one who can help her. Trapped inside the funeral home, with nobody to turn to except Eliot, Anna is forced to face her deepest fears and accept her own death.
But Anna's grief-stricken boyfriend Paul (Justin Long) still can't shake the nagging suspicion that Eliot isn't what he appears to be. As the funeral nears, Paul gets closer to unlocking the disturbing truth, but it could be too late; Anna may have already begun to cross over to the other side.
Actors:
Christina Ricci, Liam Neeson, Justin Long, Chandler Canterbury, Celia Weston, Luz Alexandra Ramos, Josh Charles, Rosemary Murphy, Malachy McCourt, Shuler Hensley, Alice Drummond, Sam Kressner, Doan Ly, Jack Rovello, Prudence Wright Holmes, Celene Keller, Barbara Singer, Laurie Cole, Jonny Fido, Bill Perkins
Directors:
Agnieszka Wojtowicz-Vosloo
Writers:
Agnieszka Wojtowicz-Vosloo, Paul Vosloo
Studio:
Anchor Bay
Genres:
Drama, Horror, Thrillers

This is just me having a big fat rant, - After.Life review by CP Customer

The description of this film made me want to watch it because it sounded like such an unusual plot line and would possibly hold my attention.

It held my attention because of how shockingly bad it was, and I'm really easy when it comes to horror (I enjoy watching Jeepers Creepers 2). The plot line and the reasoning behind it was really obvious from the start, and it just irritated me.

If you enjoy films where nothing gets explained and its all a bit cryptic then you might enjoy this, I don't like plot lines to be handed on a plate but this film seemed to be trying to say something to me like 'value your life' or 'don't take anything for granted' a bit like Saw...But all it did was make me want to take my own life.

The only good aspect of this film is, if you think Christina Ricci is hot or you are feeling a bit lonely: She's naked for the majority of the ending.

I'm trying to think about a film that is similar to this or maybe one that is on the same wavelength apart from Saw which was an ok film until they made 18 million other films and then one in 3.D I can't compare this to anything I have seen, apart from maybe some dog poo in the street. :D

The idea was interesting and makes you think but it just dragged on. Unfortunately it had a bad ending, so for me that just topped it.

Let me out of here! - After.Life review by CP Customer

The plot in this movie is not complicated. A maniac funeral director (Liam Neeson) is determined to bury anyone despite them not actually being dead. Christina Ricci is one such unfortunate and he almost convinces her she is actually dead. It could almost be a scene from the Adams Family (christina's claim to fame). It is quite suspenseful and you find yourself shouting to her boyfriend to help her but in the end you know what's coming. It was an Ok movie.