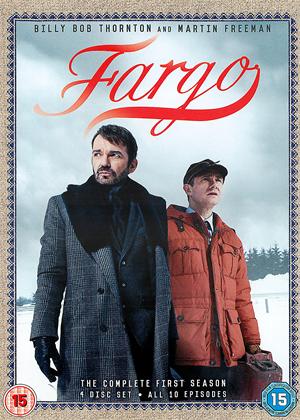 Right up there with the best series I've ever seen, e.g. Breaking Bad, Sopranos, Dexter.

superb acting, a storyline that keeps you guessing, great ending yet deliberate unanswered questions leaving impressions in the mind! LOVED IT.

One of the best. Hard to believe that it's a true story. I doubt a better plot could have been written. Great characters.

I loved the original film Fargo (though the Oscar-winning actress in it is now seriously over-rated as she wins yet more Oscars).

This spin-off, however, irritates as much as pleases. It's what is known as 'milking it'.

It reminds me of self-consciously quirky, preppy, US humour - like Frank Zappa. I found him unfunny and unenjoyable too.

There's a lot of flab here and way too much self-conscious quirkiness, acting up for the camera in an unrealistic setting - a bit like a panto. Not to my taste really.

There are so many - far too many - unlikely random events happen to look good or move the plot forward. Deus Ex Machina on steroids then. I know the Coen brothers films are well-known for this sort of thing - but then this is just a spin-off of the original movie which was entertaining.

The acting is fine, with Martin Freeman finally emerging from typecast Office hell. And he gets the accent spot on.

In short, this is nowhere near as funny or clever as it thinks it is. So 3 stars. Watchable but unremarkable.

As a native Minnesotan, there’s a local love/hate relationship for the exaggerations of the Coen Brother’s dramedy Fargo. The comically thick accents embarrass both the outsider questioning and the Minnesotan sighing. No, we don’t all say “oh yah” or “you betcha”, but there are some elements of that stately culture you can’t deny. The way a Texan remarks towards King of the Hill, there are those moments where you mutter under your breath about some truths in the comedy you don’t want to admit are real. The most notable being when a man shoveling his driveway reveals information to the police with a hoser style of inflection and storytelling. Despite that being the only moment that felt incredibly authentic, it’s hard to stay mad at what is arguably one of the best films of the 1990’s.

Which is why Noah Hawley’s TV series of the same inspiration is a rather tall order, even with Joel Coen and Ethan Coen acting as executive producers. The good news is that, while still borrowing certain elements of the film with winks and nods, this first of the Fargo series has enough strength to stand on its own. This is due in no small part to the phenomenal casting choices. Billy Bob Thornton perfectly embodies the quiet mop-top psychopath Lorne Malove who turns lives upside down. While passing through Bemidji in 2006, he takes advantage of the weak-willed insurance salesman Lester Nygaard (Martin Freeman). As the meek man pushed too far, Lester takes Lorne’s advice and murders his wife. When he arranges for Lorne to clean up, Lester attracts a cop that Lorne now has to kill. Racked with guilt, Lester struggles to maintain his innocence and live with his semi-guilt.

While this case is a top priority for Bemidji deputy Molly Solverson (Allison Tolman), she has her hands full with Malvo’s other murderous projects. In between his killing spree, Malvo’s second target is grocery store owner Stavros Milos (Oliver Platt). Given Milos’ belief in Christian religion, Malvo tortures him with religious plagues in exchange for ransom money of his son. And the plot becomes even messier with the addition of a plucky Duluth deputy (Colin Hanks), an I-don’t-want-to-hear-it Sherrif Oswalt (Bob Odenkirk), two hitmen assigned to take out Malvo (Adam Goldberg, Russell Harvard) and two bumbling FBI agents assigned to the murders as well (Jordan Peele, Keegan-Michael Key).

Despite not being shot in Minnesota, the show manages to capture the desolation of the snowy midwest just fine in Alberta, Canada. Killers drag their prey far out into the center of an iced over lake, dumping the corpses in the middle of a white wasteland. There are some rather impressive evening shots of the quiet rural area as well as some perfectly staged for moments of action. At one point a firefight is staged from inside a house - an automatic weapon firing from the window at surrounding police cars amid a heavy blizzard. A swat team stages a raid on the home with a powerful choir overtaking the soundtrack.

Adopting the fictional timeline from the film, there are several winks and nods to the original plot even for taking place nineteen years after those events. Remember that suitcase of money that was buried and never found in the movie? Turns out Stavros Milos found it which led to his grocery empire. Many of the characters are also callbacks to the archetypes from previous film what with Martin Freeman channeling William H. Macy’s nervous traits and Allison Tolman mimicking the plucky instincts of Frances McDormand. There are even entire scenes that hark off the movie such as the ransom exchange that takes place at the top of a parking garage. It even ends in a similar way, but with a pleasing twist. You don’t have to have seen the Fargo movie in order to appreciate these bits, but it certainly makes them all the more entertaining.

This Fargo miniseries takes all the off-beat charm of the Coen Brothers' film and blows it up with more characters, plot strings and gritty violence. It’s a darkly humorous ballet of good and evil that is a real treat with each episode. There is always something twisted and unexpected as the story continues to curve and builds to absurdly entertaining lengths over its ten episodes. This is some of the most finely crafted television out there and it warms my heart to see that it has garnered a second season. The only way this show could possibly be any better is if it were actually shot in Minnesota. If you want to have a dark laugh at an embellishment of our state, you might as well play in our backyard for that authentic “oh yah.”