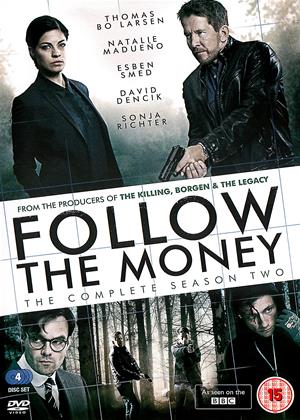 If there is something that all of us can come with a consensus upon, it is the sole notion that our common enemy is the bank. They hold our hard-earned money, we put our trust in them to treat our money as diligently as possible, but in recent times we’ve all seen that sometimes (more often than not) banks can screw it up pretty badly. Follow the Money: Series 2 builds a narrative around banks, and whilst this could’ve been a potential flop, the second installment manages to pull it off and take this into an account (pun intended) of epic proportions instead.

The first series starts off by recapping the events as told in the first series, with a brief but effective re-introduction of the main characters and the standings in regards to where the narrative is. And so, Mads Justesen (played by Thomas Bo Larsen) and the rest of his investigative squad happen to stumble upon a case where it seems as if someone (or multiple someones) tries to con their way into making money out of liquidated businesses. Soon however, it turns out that this seemingly ordinary case of crooks holds many secrets behind hidden doors, as a bigger conspiracy unravels before the very eyes of Mads and the squad.

Further, Follow the Money: Series 2 very much sees Mads as just another gentleman determined to find El Dorado no matter the cost. He’ll but heads with everyone and take down any task just to achieve his goals and get the results as he envisioned them beforehand. Then there is Claudia Moreno (played by Natalie Madueño) who has just recently seen the light of day (after spending some time in prison due to her misbehaviors in series 1). In fact, Claudia is absolutely determined to dismantle the schemes of the brain behind it all – Knud Christensen (Waag Sandø).

One important thing to note is that Follow the Money: Series 2 plays the ol’ switcheroo game, where it (falsely) leads the audience to believe (myself included) that the biggest mystery in the series would be unraveled around the middle of the show. However, due to clever writing, the second instalment of the series takes an unexpected turn and only then we realize how far and wide the fraud is actually weaved. Good job on the writers part, and good work making it all blend seamlessly with the remainder of the narrative threads (and the complete overarching storyline as well).

Finally, is Follow the Money: Series 2 worthy of your time, or… well, let’s just stop there and say that yes, the series is indeed something to consider for fans of the thrilling/mystery genres. Not recommended for the whole family, but highly recommended for a mutual watch with girlfriend/boyfriend.