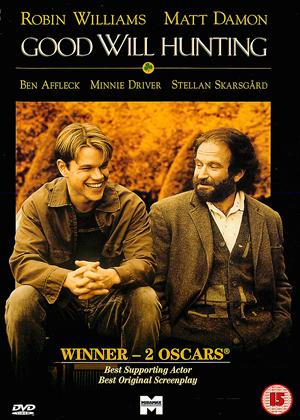 Reviews (2) of Good Will Hunting

i absoloutely LOVE this film! it is such a well rounded movie, there are performances to make you laugh, make you cry and you can relate to each character the whole way through. fantastic acting from matt damon, ben affleck, minnie driver and robin williams. but, of course, robin williams and matt damon make this film as special as it is, the relationship which develops between these two men is completely realistic and robin williams does a very good transition here from funny man to strong and serious as he also does in 'the night listener'. great film would recommend it to anyone. have bought this and watched it a thousand times it is that good. a real gem!

Robin Williams is usually a bit too over the top for me, a manic comedy actor, but this film and also 'One Hour Photo' show a much more restrained side to his acting abilities.

The storyline goes like this: Will Hunting (Matt Damon) is a lowly janitor at MIT who is also a genius mathematician. He lives in Southie (South Boston) and hangs out with his blue collar friends, drinking beer etc. He is arrested after a brawl and released into the care of an MIT professor on condition he attends therapy sessions with a psychologist. Will sees off several therapists and eventually ends up with psychologist Sean Maguire (Robin Williams) who is able to understand the emotional damage he has suffered from his abusive childhood, forms a bond of trust and friendship, and encourages Will to follow his girlfriend (Minnie Driver) rather than a career as a mathematician.

Yes, it sounds implausible (and it is) but it works really well and the excellent script and excellent performances allow you to suspend any disbelief you may feel and enjoy what is a very moving story. Great stuff - 5/5 stars.