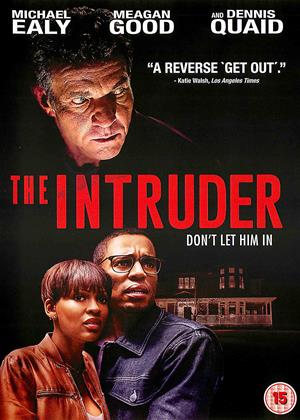 Reviews (1) of The Intruder

Ok I guess - The Intruder review by TH

The Intruders is a pretty standard film. The storyline has been done time and time again and doesnt really offer anything new. The lead characters are fairly 2d (Micahel Ealy looks bored throughout) and Dennis Quaid is playing the typical nice guy turns bad guy stalker at a flick of a switch. It isnt terrible but it's highly likely you have seen a similar better version of this film at 3pm on Channel 5.

Ok I guess - The Intruder review by TH

The Intruders is a pretty standard film. The storyline has been done time and time again and doesnt really offer anything new. The lead characters are fairly 2d (Micahel Ealy looks bored throughout) and Dennis Quaid is playing the typical nice guy turns bad guy stalker at a flick of a switch. It isnt terrible but it's highly likely you have seen a similar better version of this film at 3pm on Channel 5.

The first thing that came to my mind while watching The Intruder was the episode of King of the Hill where Peggy Hill attempts to sell a home with a play. She writes a stageplay and hires actors to put on a performance that features plenty of drama but also showcases all the features of an immaculate interior. I’d like to think this film was written a similar way considering how much of its tension revolves around the house and so little on any interesting personalities of the people who occupy it.

It’s the story of a young couple, Scott (Michael Ealy) and Annie (Meagan Good), looking to find a place to settle down. They happen upon a HUGE countryside estate owned by hunter and single-dad Charlie Peck (Dennis Quaid). He seems like a nice enough guy even if he is first seen shooting a deer on his property. He’s fairly open to letting the couple own the house for an apparent steal of just over $3 million. He hands over the keys after an elaborate tour of the place and showcasing all the features. It’s such a long sequence that you’ll be wondering if you popped in a home and garden video by mistake.

But the turning over of the place is not the last Scott and Annie will see of Charlie. He’s sticking around to mow the grass because he knows they won’t mow it just right. He takes a tour of their new version of his place and is quietly bitter about what they’ve done to the rooms. And when he is invited as a dinner party guest, there’s a contentious argument about the whole out with the old in with the new philosophy. This element does not sit well with Charlie and he fantasizes about slaughtering all those uppity young people destroying what was once his.

But, of course, that’s not enough motivation for a deadly thriller. Thus, all the cliches of an assaulted and stalked couple crop up as the film progresses. Scott and Annie are not just any couples; they’re a couple with marriage problems, where infidelity and jealousy hinder their next stage of having a kid. Charlie isn’t just some kindly old man but a murderer who has a massive stalker problem. He secretly pops into the place at the worst times, either when Annie is unloading groceries or Scott and Annie are having sex. It’s not even a vile look he gives them as he invades their privacy, looking more as though he forgot what he came into a room to get than viciously stalking his prey.

All of these tired tropes build-up to not much of anything. By the time Charlie snaps and finally makes his first kill of the picture, it carries no kick or surprise. We practically expect him to do so at that very moment when he’s holding an ax and nobody else is around to see his kill. But what fun is there in that? Look, I know all of this is just leading up to a couple cowering in their house as an angry Dennis Quaid hunts them. But there’s so little interesting build that I couldn’t care less with all the excuses and staging used to hit this climax. There’s no grander commentary on the nature of generational divide and the ultimate ending comes off like more of an amateur action picture than a chilling thriller.

The Intruder ultimately delivers a predictable and tired thriller, so bereft on building on its themes and settling for a foundation of cheap thrills. I couldn’t help but wonder if something had been left on the cutting room floor to better explain such a lacking picture. Digging through the DVD, I found an alternative ending, where Charlie actually survives the encounter with the couple who apparently murders him. Okay, but then what happens? Uh, not much. I guess Charlie just secretly lives in the home again. As far as alternative endings go, this one seems most warranted for being cut, mostly because it’s a shrug for the movie running out of ideas in its desperation for a twist.