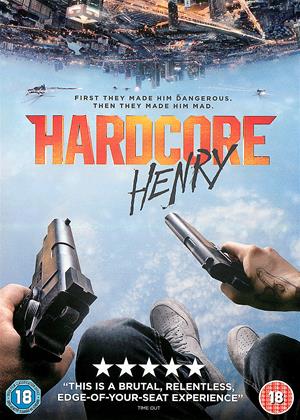 Synopsis:
You remember nothing. Mainly because you've just been brought back from the dead by your wife who tells you that your name is Henry. Five minutes later, you are being shot at, your wife has been kidnapped, and you should probably go get her back. You're also in an unfamiliar city of Moscow, and everyone wants you dead. If you can survive the insanity and solve the mystery, you might just discover your purpose and the truth behind your identity.
Actors:
Sharlto Copley, Tim Roth, Haley Bennett, Danila Kozlovsky, Andrei Dementiev, Svetlana Ustinova, Darya Charusha, Oleg Poddubnyy, Jack Hahn, Cyrus Arnold, Jake Karlen, Will Stewart, Ilya Naishuller, Martin Cooke, Sergey Chekrygin, Vladimir Lukyanchikov, Andrey Berezkin, Prokhor Zikora, Ravshana Kurkova, Vasiliy Bobylev
Directors:
Ilya Naishuller
Producers:
Timur Bekmambetov, Ekaterina Kononenko, Ilya Naishuller, Inga Vainshtein Smith
Writers:
Ilya Naishuller, Will Stewart
Aka:
Hardcore
Studio:
Entertainment In Video
Genres:
Action & Adventure, Sci-Fi & Fantasy

Bit like a bloody computer game. The guy Jimmy is actually a very competent actor. Hopefully he may get some proper parts in the future, in more conventional films.

The kids will love it, older kids. Masses of continuous violence and body parts flying about. If that is your bag then you in for a treat

Hardcore Henry is not a movie - it is a ride. It’s that one experimental picture destined to launch a format where movies are viewed through visors. There’s not much of any story to be invested in here as the movie plays out as the coolest first-person shooter video game you’ll never get to play. You just strap in and enjoy the technical marvel of violence on screen.

Yes, there’s a story present, but it’s rather simplistic and secondary to a picture that favors style over substance. This much is clear from the unimpressive writing of a super-soldier trying to take on an evil organization that sends armies of super-soldiers after our him. There are a few characters present, but they exist as one-dimensional figures of base motivations ripped right out of a video game. Our titular lead, in particular, is never fully seen or even speaks as we spend the entire movie from his perspective. The violence is monotonous, the action is nonstop and the frantic nature of the first-person perspective never shifts. If the shaking of the camera makes you ill, this movie ensures that you’ll vomit.

Most critics will go after all these points to remark that Hardcore Henry is mere junk food entertainment for all these points. And most gamers will use these exact points to praise Hardcore Henry as the first movie that finally gets video games and their appeal. As for myself, I fall somewhere in the middle, recognizing the picture as a gimmick of a ride with all its thrills and shortcomings.

The gimmick for this picture was spawned from director Ilya Naishuller who first used this GoPro style shooting on a music video. His editing and cinematography skills with this style resulted in this movie being made thanks to impressed producers and crowd funding. Naishuller clearly has an eye for detail and energy, but that’s all he has. He most likely approached this project thinking more about cool set pieces and stunts than a clever narrative with unique characters.

But the real question is how well does this concept hold up. It’s a shooting style that appears eye-catching in a music video, but can it keep that drive for a feature-length picture? Not exactly, but it does have its fun little sequences. I really can’t go into much detail without sounding like an excited little kid who just played his first violent video game. Henry shoots a lot of people in a building. He jumps off rooftops and dives out of a plane. He takes on a roof packed with evil soldiers that he must defeat with all his surroundings. He kills people with frenetic accuracy and giddy insanity, perfectly shot by Naishuller’s trademark style which I hope won’t become his one trick of his career.

While Naishuller does a sufficient job at making a movie that is willing to take risks with such material, it perhaps doesn’t take enough the way Henry's rampage becomes repetitive. The whole GoPro method of shooting starts to lose its magic after a while as the movie presents stunt after stunt after stunt. It just becomes excess to the point where clever camera work and bloody special effects just don’t pack as much of a punch. The movie has to constantly throw more wild stuff at it to keep you interested in the form of massive body counts, loads of blood and a particular nasty sequence where a character strangles another with the tendons of his eyeball.

Hardcore Henry will get the job done as a visual thrill of bloody action, but it won’t do much else. It’s an experiment where Ilya Naishuller attempted to blur the line between video games and movies, appealing to the adrenaline instincts of the gamers with a perspective they’ve grown accustomed to. But as an experiment, it still has plenty kinks to work out. Namely, he needs to work with a real script that can match his visual expertise. If he does, his movies will be more than just roller coasters, pretty and well-crafted as they may be.