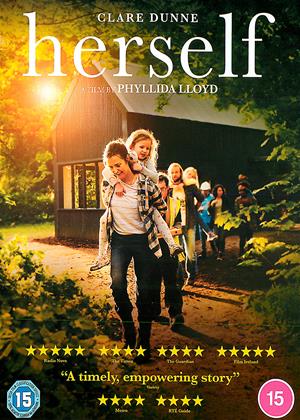 Synopsis:
Sandra (Clare Dunne), on the surface of it, is a young Mum struggling to provide her two young daughters with a warm, safe, happy home to grow up in. Beneath the surface, Sandra has a steely determination to change their lives for the better and when it becomes clear that the local council won't provide that home, she decides to build it herself from scratch. With very little income to speak of and no savings, Sandra must use all her ingenuity to make her ambitious dream a reality. At the same time, she must escape the grip of her possessive ex-husband and keep him away from her and her girls.
The lionhearted Sandra draws together a community of friends to support her and lend a helping hand and it is the kindness and generosity of these people and the love of her young daughters that help build her own strength and sense of self.
Actors:
Molly McCann, Clare Dunne, Ruby Rose O'Hara, Ian Lloyd Anderson, Shadaan Felfeli, Harriet Walter, Cathy Belton, Art Kearns, Ericka Roe, Anita Petry, Lorcan Cranitch, Tina Kellegher, Donking Rongavilla, Eimear Morrissey, Ger Carey, Liz Fitzgibbon, Damien Kearney, Sean Duggan, Laura Kelly, Frank Prendergast
Directors:
Phyllida Lloyd
Producers:
Rory Gilmartin, Ed Guiney, Sharon Horgan
Writers:
Clare Dunne, Malcolm Campbell
Studio:
Picture House Entertainment
Genres:
Drama
Countries:
Ireland

Phyllida Lloyd’s strong third film is part social-realism part heartwarmer, with echoes of Leigh or Loach but carefully avoiding all-out desolation. And in Clare Dunne the film has an exceptional female lead, one who spearheads the action superbly with a knife-edge performance of raw ferocity and fragility as Sandra, who's living with the fallout from leaving her violent husband, Gary.

The brutal altercation that prompts this escape is witnessed by one of her daughters just as the other runs to the corner shop with a note for the owner to call the Guards. Internal flashbacks of this horrific moment will replay in Sandra’s mind, to the panic-stricken thumping of blood pumping in her ears, at several points as its shockwaves persist. Cinematographer Tom Comerford’s initially shaky, roaming camerawork speaks to her petrified state of mind as daily life – the school run, working two jobs and sticking to weekend visits with dad – must go on, even if she and the girls are forced to live in an airport hotel. All this is very well-handled by Lloyd, thanks in large part to the tremendous performances given by Ruby Rose O’Hara and Molly McCann as the young siblings. The film also touches on the extent to which the children of a broken home are used as pawns by sparring exes and somewhat overlooked by a court system short of both humanity and a grip on reality. “Was there a reason you didn’t leave sooner?” a tone-deaf judge will ask late on in the film, demonstrating a lack of compassion and understanding of Sandra’s experience, and by extension the experience of many more.

After a rather implausible plot development involving a gift of land by Peggy (a wonderfully cantankerous, waspish Harriet Walter, who swiftly mellows), Herself focuses more on can-do spirit than it does on kitchen-sink hardship. And here lies the film's basic problem, for the the former is a lot less convincing than the latter, with the result that the film does feel rather off-balance dramatically. And then in the last 10 minutes or so, about three films’ worth of plot hit at once which make the picture’s ending a rushed feel that’s rather unsatisfying. It’s not that we want things to be harder for Sandra, quite the contrary, but her challenges—particularly her emotional conflicts—might have been explored in a little more depth.

Even so, Dunne—who has performed in several of Lloyd’s stage productions—gives plenty of dimension to Sandra’s particular brand of anxiety, optimism and determination. The sudden acknowledgement that a person you once loved doesn’t exist anymore can knock the wind out of you, and Dunne captures that breathless free fall beautifully. Well worth a look.

A social drama that manages to be both a heartwarming story of self empowerment and a socio-realist story that condemns the bureaucracy and officialdom that deals with the plight of domestic violence victims. Clare Dunn writes and stars here as Sandra, the mother of two adorable young daughters and the wife to a toxic and abusive husband. After a particularly violent assault Clare leaves and with her children is stuck in hotel accommodation while she waits to get housing from the local government. Humiliated daily and carrying several menial jobs she hits upon the idea of building her own house to a self-build template she finds online. The housing officials refuse to help even though loaning her the money would end up cheaper than the hotel fees! But she finds a benefactor in her employer, Peggy (Harriet Walter) and her journey to a new life begins although her troubles with her husband are far from over. This is an unexpected warm drama with some interesting things to say and highlight and although the help of Peggy is a little too convenient for the plot this can be forgiven due to the earnest nature of the film. Overall this is a film about self empowerment and finding strength to overcome the hurdles life throws at you. It's very watchable and and good natured.