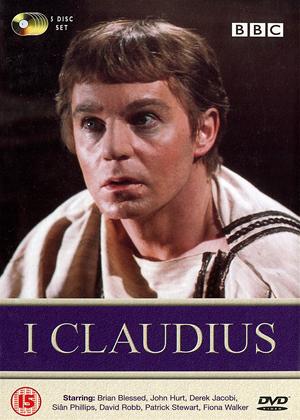 Synopsis:
"I'll put it all in here, my story, my history of the family, yes, and the end of the Republic, yes, and when I've finished I'll seal it up and bury it where no one will find it...not for 1900 years or more.." I Claudius tells the emperor Claudius' epic story spanning the annals of Roman history, from the mighty Augustus, through to the madness of Caligula, as it echoes down through the centuries.
Actors:
Derek Jacobi, John Hurt, Siân Phillips, George Baker, Margaret Tyzack, James Faulkner, Brian Blessed
Directors:
Herbert Wise
Studio:
BBC
Genres:
British TV, TV Dramas
Countries:
UK

Reviews (1) of I Claudius

Remember when the BBC not only wanted to make truly classy stuff, but actually had a legal obligation to? No, probably not. It was a long time ago (and quite possibly in a galaxy far, far away). So you might want to give this a look. It's the epic tale of a man whose slight physical disabilities caused everyone to think he was a half-wit, thus allowing him to stand on the sidelines while the mightiest empire the world had ever known almost self-destructed due to to being run by a clan of privileged monsters who, to say the very least, were mad, bad, and dangerous to know, until he finally became Emperor because the rest of them had wiped each other out. So basically, a thinking person's Game Of Thrones.

In modern terms, this is no epic. In 1976, CGI didn't exist, and the BBC have never had Hollywood budgets. If a scene calls for our heroes to watch 500 gladiators fighting 1,000 starving lions in front of 50,000 spectators, what you're actually going to see is the main cast in the royal box plus a handful of extras, and it'll all be conveyed by sound-effects and reaction shots. In fact, every second of this was shot in the studios of Television Centre in London. If a battle is crucial to the plot, it's dealt with in the Shakespearean manner - a couple of soldiers come in and tell somebody else what's happening just over there, conveniently off-camera. And so on.

Worth watching anyway? You betcha! In a situation like this, there's absolutely nothing for it but to call upon people who can do a thing called "acting" and tell them to pull all the stops out. And that's exactly what every actor who matters in this story does. Brian Blessed, the patron saint of bearded people who shout a lot, has no beard, and shouts so seldom that, when he does, you remember why he got typecast as a man who's very good at that sort of thing. And the best bit of acting he does is pure stillness - you'll definitely know it when you see it. Everybody else is so good that there are too many actors to single out, but a special mention must go to John Hurt as Caligula. He's over the top in the best possible way, and the sheer horror of trying to stay alive in a regime run by such an absolute madman is very well conveyed. But overall it's an ensemble piece that couldn't work without everybody giving truly heroic performances, especially Derek Jacobi as Claudius, who has to age about 40 years over the course of the story, but does so as best you could possibly expect him to, as do several other of the less doomed cast members.

Of course, most of them are doomed. This series, and the books it's based on, have had a tremendous influence on every subsequent drama ever made that was any good about dangerously influential but lethally disfunctional families. After watching this, you'll understand exactly why Tony Soprano's mother was called Livia. Highly recommended, because they don't make 'em like this any more. But they should!