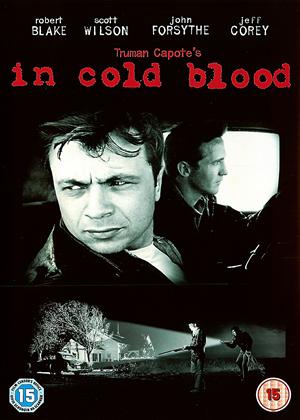 Reviews (1) of In Cold Blood

Based very closely on Truman Capote's book of the same name, this is a blistering portrayal of true evil that pulls no punches at all, except when it comes to showing us the gory details of the crime around which everything revolves. Which is just as well, because an explicit depiction of this event would have been almost unwatchable.

A film like this stands or falls by its central performances, and both the actors playing the utterly vile protagonists are extremely convincing indeed. The central theme of Capote's book is that evil isn't an abstract supernatural force; it's something that human beings inflict on each other for all kinds of twisted reasons. By understanding, even empathizing with these evil men without in any way condoning or excusing their actions, he was trying to show how a man becomes a monster, and how, if his life had gone differently, that monster might have been just a man. This movie does a chilling job of conveying the void that these two men are trapped in and consumed by, and how ultimately doomed they were right from the start. And when that doom finally comes to them, it's portrayed not as a glorious triumph of justice, but as a sordid procedure so terrifying that it's hard not to feel at least a shred of sympathy for the wretches who have to undergo it, no matter what they've done.

The characterization is perfect. We find out that both killers had horrible childhoods, yet the one who actually does by far the worst things is, paradoxically, the one who might have been a decent man if he hadn't gotten trapped in an escalating downward spiral of nihilism, and we understand that he feels guilt and self-loathing about what he did, though the fact remains that he did it anyway. The other, played by an actor who looks as though he must be related to Edward Norton but apparently isn't, is the true force of evil in the partnership, a psychopath who would have been bad no matter what, and doesn't even understand the concepts of guilt or remorse, yet is superficially charming because his incapacity to feel guilt makes him a superb liar.

It's not a perfect film. The supporting cast are mostly rather wooden, and Quincy Jones' background music is sometimes extremely obtrusive, particularly the syrupy Disneyesque "these are nice people" theme in the dreadfully overdone scenes establishing how innocent the doomed family are. Why is this even necessary? I think most viewers would get that they don't deserve to be slaughtered without seeing them being oh so very, very wholesome! And the interlude in the desert with the old man and the little boy is so obviously there to symbolically show that no situation is absolutely black and white, and even terrible people can have moments of goodness, that it feels (and presumably is) very fictional indeed compared with the rest of the film. But overall this is a very powerful and unflinching exploration of the dark side of humanity, and although it's not exactly fun to watch, it's hideously compelling.