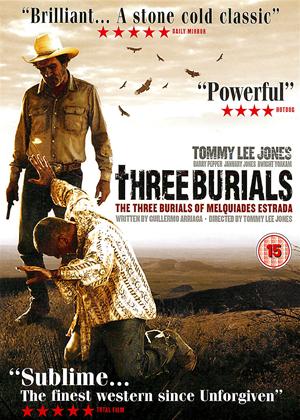 Rent other films like The Three Burials of Melquiades Estrada

Reviews (5) of The Three Burials of Melquiades Estrada

Excellent character portrayals by all involved suck you in. Although slighty unbelievable in placees (i.e. dragging the dead body around for a number of days) its a good movie.

Very similar feel to the movies coming out of Hollywood at the moment i.e. Brokeback and Lost in Translation - slow and very very atmopsheric. If you liked them then the chances you'll enjoy this.

Is it me? I should love it but... - The Three Burials of Melquiades Estrada review by Kurtz

...Why don’t I like this film more? It pushes all the right buttons in that it’s handsomely mounted with beautifully desolate settings, and it celebrates the triumph of friendship and loyalty shown by Tommy Lee Jones’ rancher to his dead friend over the callous indifference of the lawmen and particularly Barry Pepper’s racist border guard. And yet, and yet… after a promising opening which quickly sketches in the social tensions in a dead-end Texas town and shows us the roots of Jones’ character’s friendship with Estrada, Jones kidnaps Pepper and forces him to transport the hastily buried body of Estrada back to his Mexican homeland. And from then on it’s pretty much a two-hander with Pepper suffering all sorts of indignities and Jones setting world records for gruff dourness. For me, these two (Estrada, being dead, contributes little) make rather dull companions for the last forty minutes of the film and the faint hope of Pepper learning from his horrible experiences is all we are left with at the end- that and a palpable sense of relief that our journey, like Estrada’s, is over.

A powerful story told through a mix of genres. - The Three Burials of Melquiades Estrada review by CP Customer

I was really surprised at just how much I enjoyed this film. Director Tommy Lee Jones cleverly tells the story through a wide mix of genres from crime drama to revenge drama, to tale of redemption and peppered throughout with moments of dark humour.

The result is a film which is almost like a mix of Tarantino meets the Coen brothers but at the same time has its own unique feel about it. The story unfolds fairly gently until it hits the 30 minute mark then takes you on a powerful journey which absolutely holds your attention throughout. This is a film expertly directed, with a cleverly written and engaging story with great characters and a superb cast. If you like Coen brother thrillers like 'No Country for Old Men' and 'Fargo' then this should be something you'll enjoy.

A great movie with a real wild west feeling. Poignant performances from the leads with black humour and empathy in spades.

Great film? No. - The Three Burials of Melquiades Estrada review by JD

In the bonus section Tommy Lee Jones admits that this is not a great film. I would agree. It has lots of character development, atmospheric cinematography and a steady plot. The acting is not great and I would suggest the direction suffers from having the director also playing the main character, (directing himself). This brand of Hollywood egoism is unfortunately not uncommon. The genre is unusual lying between detective drama, foreign interest (Mexican) and cowboy. Not a genre about to become more common, I hope.