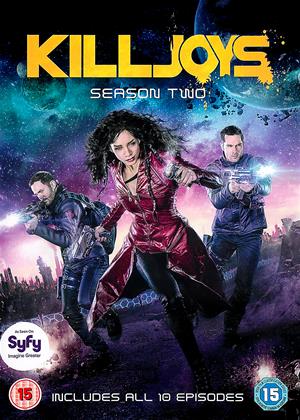 Killjoys: Series 2 features a plethora of recurring and original characters that drive the experience forward into an exalting, pulsating, vibrant, and expositional-dense ordeal. In fact, the second season continues right where the first one left off (occurring otherwise would be a cardinal sin in consecutive narrative logic), with Johnny and Dutch trying to pinpoint D’Avin in order to execute a rescue mission. That was season 1. Season 2 starts with a heartfelt message from Dutch to D’Avin in which she explains that she will see him rescued no matter what happens. And thus Killjoys: Series 2 kicks off.

As the above scene unravels, so do some unexpected and borderline improbable things start happening: bombs go off, explosions and sparks blaze everywhere, and a kiss between Dutch and D’Avin is shared. Soon, to the dismay of many, it becomes clear that the previous series of events was only a dream experienced by none other than Dutch. As much as would be disappointing for some, it perfectly sets the tone for whatever happens (or may happen) in the future. Oh, and the episode is titled ‘Dutch and the Real Girl’, directed by D.J. Carson and penned by Lovrette.

Afterwards, the rest of the crew dispatches in a search-and-rescue mission on the Arkyn Moon, but they are stopped dead in their tracks because of a radiation field circling around the celestial body. And so, Dutch, Johnny, and the crew’s newest member Pree (played by Thom Allison) must infiltrate Eulogy – a place resembling a space casino of some sorts. True to saying, Eulogy is really a space casino harboring all kinds of criminals and thugs with little room for any real nuance or character development. But, the ensuing back and forth between Pree and Johnny, especially during a much-needed distraction to circumvent the existing system, is worth every step of the way as the two of them strike the perfect balance between both action and humor as well.

As the mission runs into few obstacles, our team still manages to pull it off, and so the so-called “shield” they were after – turns out it’s not an object, but a living, breathing woman named Clara (Stephanie Leonidas). Clara is an interesting individual who has a gun named Alice instead of an arm, and helps the team (by help, I mean shooting everyone in sight) to escape Eulogy for good. On their way out, Clara goes into exposition mode and explains how she was used by the outlaws to hide the shield in her innards, after which those same outlaws cut her arm and installed a gun in order to keep the shield safe. Not cool outlaws, not cool.

The rest of Killjoys: Series 2 goes about the same way: first a problem, then a conflict followed by impossible odds, and finally a solution to the problem-at-hand. It’s a little bit formulaic, but it sure is also fun as all hell.