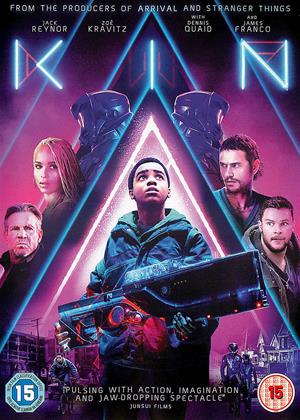 this is not a sci-fi movie - Kin review by KG

I love this film. I have read a lot of reviews of this film mainly because they were poor or average and wondered if they were speaking about another movie. It is about the relationship of two brothers who have not seen each other in six years and the rest of the characters are there to more the story along. The sci-fy element is strong but it has so much more depth than that. Why do critics have to pigeon hole movies then review them depending upon their genre. This crosses genres and is better for it. The acting is great, the soundtrack is fantastic, the special effects are subtle, the performances are brilliant, James Franco makes a great baddie, cinematography is stunning. How can this average 3 stars. Please can more film makers make sci-fy thought provoking like this rather than the mundane superhero junk or star wars regurgitation of a screenplay from the 1970's.

I still can't decide whether I think this is a good film or just yet another average plodding along B Movie! The storyline is far from original and has been done before so many times in so many formats. This is basically a brother bonding road movie that has been given a si-fi element to beef it up a bit and a few criminal elements to give it some action. Otherwise it really is simply a road movie about two brothers bonding whilst on a road trip, morality message thrown in, oh and of course one has to also throw in the obligatory female just for the sake of it, even though she's completely irrelevant to the story! Zoe Kravitz, who plays the love interest in this, her acting is very average and having seen her in a number of other films, I get the distinct impression that she is only getting the parts because of who her father is (Lenny Kravitz), a bit like Jaden Smith syndrome! The acting from the two leads is solid and so is the direction, it is quite a good film, but I found it dragged in parts and seemed to have a very strong interracial message, which is a good thing, but very American and it was quite predictable who the Aliens were and what connection the young lad had to them. And of course they simply couldn't help setting us up for a sequel towards the end, which really annoys me in films! When this started and we saw the shot of the housing estate, I thought it was a low budget Film Foundation affair, where they fund up and coming film makers, as it had that kind of feel to it, as if most of the people involved had just come out of Art College and were making their first steps into the industry!

Kin is an interesting mash of genres. Eli (Myles Truitt) is an adopted African-American boy of 14 reeling from the death of his mother, and trying to live up to his father's tough expectations. The return of his jailbird older brother Jimmy (Reynor) does little to stabilise things at home, especially when it turns out he owes a huge sum of protection money to James Franco's enjoyably sleazy ex-con 'Taylor'. All of that excludes a Detroit setting that looks so poor and virtually bombed-out that it could be a demilitarised zone, and Eli's discovery of several dead high-tech soldiers in futuristic armour, and a peculiar weapon...

To avoid spoilers I'll give the vaguest brush-strokes about the plot, and say that things deteriorate sharply, and soon Jimmy has tricked Eli into a road trip west, hotly pursued by Taylor's nasty gang and a pair of future-warriors who've realised that their Armoury is short by one piece of extremely destructive weaponry.

Reynor is as good as he's ever been, playing amiable, nervy, juvenile and self-hating in rapid rotation, and Zoe Kravitz is an enormous boost to the cast when she joins the film about a third of the way through, bringing a laid-back confidence and level head to events.

Myles Truitt is superb as Eli, shouldering much of the film and displaying an extremely broad range of nuance and talent. The scenes where he talks with Kravitz are perfectly pitched, and it feels like we must be looking at a future star in the making.

In terms of tone and action, the film veers between road movie, family drama, heist film, chase movie and action-film. It never gets dull, the action is nicely spaced-out throughout the film, the array of characters encountered along the way remains consistently interesting, and the stakes keep escalating until a climax that brings action, emotion, explosions, extremely flashy SFX, and some gorgeously slick stunts (this may include the most stylish flip across a car hood in recent film history).

Although it does commit one sin that I abundantly detest (sequel-baiting), thankfully it does remember to make this a complete, satisfying film in its own right first.

The violence and language might make this a touch unsuitable for viewers under 10, but I think the '15' rating might be a little harsh, and it's probably due to some of the brief themes and visuals during one key scene.

It's also a film with a very nice visual colour palette and some interesting ideas. I certainly wouldn't be sad if they followed this up in a timely fashion, and gave us a 'Kin 2'.

What do two Baltimore brothers, a kind-hearted stripper, and a ray gun have in common? Not much, and that’s part of the problem with Kin. It’s a genre-mashing adventure that throws so much at the screen, from young adult wish fulfillment to 1980s throwback ingredients, that ultimately never becomes the earnest romp of a sci-fi adventure with tongue firmly in its cheek. Too somber to be campy, too ridiculous to be dramatic, it exists in that strange void of not-quite-there 1980s science fiction of grand ideas with cheap budgets. It’s a chasm I’m not quite sure I want to be so nostalgic about.

The premise itself is not too shabby if you’re seeking a more original story. Elijah (Myles Truitt) is a teenager with a somewhat tough life in Baltimore. He was adopted by Hal Solinski (Dennis Quaid), a blue-collar worker pushing for his son to pursue a life of honesty and hard work. It’s not easy to do in a broken down Baltimore where Elijah’s only means of money is snatching copper wire. It’s even tougher when Elijah’s older brother Jimmy (Jack Reynor) has recently been released from prison and still has some dirty deals going. One such debt he needs to repay is for prison protection and local kingpin Taylor Balik, played by James Franco with ridiculous corn rolls and tattoos, has come to collect. It isn’t long before things go south for Jimmy, leading him to take Elijah on an emergency road trip.

But, wait, isn’t this a science fiction movie? Partially. It’s more of a crime drama with some sci-fi elements tossed in as a wild card. If Elijah and Jimmy are pursued by gun-toting criminals that want them dead, let’s see what happens when a ray gun is thrown into the mix. Naturally, it blasts the criminals to ash. Neon ash, for that subtle dose of the 1980s. Where did the ray gun come from? Elijah discovers it while scouting an abandoned building and, sure enough, some dark-looking, Daft Punk style cyborgs have come looking for the taken weapon. They’re hardly in the film, always seeming to be one step behind, until showing up for some flashy special effects in the climax. Trust me, you’ll understand why they’re kept to a minimum when their underwhelming purpose is revealed.

To enjoy Kin takes quite a bit of suspension of disbelief. The movie proceeds at such a contemplative and speedy pace that you just have to go with it at times. For example, Elijah seems to take quite easily to the ray gun he finds, easily able to turn it on and figure out its different firing functions within one or two sessions. How this is possible could be explained by his favorite cartoon being the 1980s cyberpunk anime, Bubblegum Crisis. But, wait, this film takes place in modern times? What kid in the 21st century is watching Bubblegum Crisis? For a clearer explanation, there’s also a twist about Elijah’s past but its such a predictable insertion of young adult wish fulfillment I almost burst out laughing at the audacity to pull such a familiar stunt. And I’ll spare you the can of worms about how Elijah is able to enter a strip club that doesn’t seem to have any topless women on the stage.

Kin has its moments. There’s an almost admirable somberness for treating the story’s darker aspects of a shattered family with honesty. The scenes with the ray gun turning people to ash and causing massive explosions are fun, especially in a chaotic police station and a strip club with neon dressing. It’s just too bad all the parts don’t exactly mesh, leaving a film that becomes rather confounding in tone, yet fascinating enough in its conception that I wanted to see it succeed. One thing I can say for sure is that it’ll easily appeal to teenage boys seeking some fantasy. What boy wouldn’t want to go on a road trip with their brother, enter into strip clubs, and fire ray guns at bad guys?