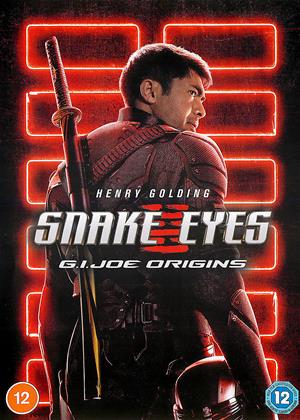 This is moviemaking with stencils and made according to strict blueprints - however, nobody went to see a GI Joe movie for originality, grit and realism. For me, Snake Eyes was all about the fight sequences which are short, varied, and fairly thrilling. It's OK to switch off when the characters are talking to one another as it never amounted to anything interesting. I enjoyed the scene at the docks where the lorry Snake Eyes and Storm Shadow are driving gets riddled with samurai swords in a fierce battle. It's fun but nothing special. It's very thin.

Snake Eyes may be the most grounded of G.I. Joe movies to date. It’s an understate enough action film, even for one with giant snakes and magic stones. It may even be labeled the best G.I. Joe movie ever made for those who marked off the previous entries as silly trash. That’s saying a lot for a film that brands itself with the unenthusiastic label of being an origins story, especially for such a mysterious character that mainstream audience probably has little investment with. All of that being said, there are still a few kinks that had yet to be ironed out in this sterner take on the action-figure franchise.

In a way, Snake Eyes comes about with a tone that most fans may have been hoping for. The mysterious character is known only as Snake Eyes (Henry Golding) starts off as an orphan who watched his father killed by hitmen. He grows up to ascend from underground fights to the inner workings of the yakuza, working under the deceptive Kenta (Takehiro Hira). Through this organization, however, he comes to escape with Tommy (Andrew Koji) and train for a place in the secretive Arashikage clan of Japan. Or so he thinks.

The best thing about Snake Eyes is the writing that comes bridled with twists and turns about how far Snake Eyes is willing to go for revenge. Revenge becomes so brilliantly woven into all of the characters and showcases just how destructive and empty it can be. Those who seek revenge are doomed while those who pull back from the brink succeed. More importantly, the villainous organization of Cobra takes advantage of this desire and uses it for its own advantage of terrorism around the globe. Of course, G.I. Joe exists more as a helping hand than committed to violent satisfaction.

The fight scenes are also well-staged so that there’s a lot of variety. Everything from martial arts to sword fights to gunplay is present, often taking place in explosive locations and high-speed chases through the streets of Tokyo. It’s just too bad that the camera can’t follow it all. So many scenes are so chaotic that the unsteady camera shakes all over the place, struggling to keep up with the characters in all their wire-fu jumping and gritty throwdowns in back alleys. It’s really a shame that the fantastic sequence of Snake Eyes and Tommy escaping the yakuza can’t be properly steadied to appreciate such sights as all the yakuza trying to stab their truck while they reverse their way out of the scene.

The acting is also quite wooden. Golding does a decent job trying to provide small moments of levity but he mostly remains a stiffly stoic action figure. Andrew Koji is certainly the highlight of the picture as a man who goes from being a grateful member of a clan to a spiteful one aiming for more. Haruka Abe, who plays Tommy’s security officer, seems to fade in and out of various accents, spanning from Japanese to UK English.

The fandom is no doubt going to be incredibly frustrated with this picture considering there isn’t much of G.I. Joe or Cobra. In fact, there’s really only one active member of each organization in the picture, as with G.I. Joe’s Scarlett (Samara Weaving) and Cobra’s Baronness (Úrsula Corberó). Those hoping to see Snake Eyes in his iconic suit that hides his face may be dismayed to discover his donning of the attire is an afterthought, just as much as the mid-credit scene of Tommy literally declaring himself Stormshadow.

Speaking as a G.I. Joe, however, I must say that the general premise pleased me. The understated approach is worth considering rather than just repeating the same old Joe formula once more. There’s something admirable about such an assembly. I just wish it was assembled better so that the film has the ideas AND the execution. As it stands, Snake Eyes is more of a decent action picture than it is a G.I. Joe movie, for better and worse.