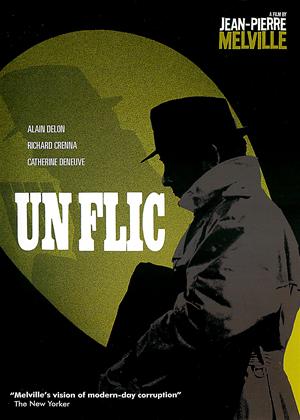 Sign up
An Autumn Afternoon / A Hen in the Wind

Beyond Belief - The Cop review by NW

This film is spectacular, sharply and sparely filmed - as always with Melville - and meticulously detailed. Before watching it make sure that all your mental facilities for multiple plot line tracking are fully active and you are ready to distinguish between all the solidly built men in suits and trenchcoats! At the end of my first viewing of this tale of professionally planned robbery, treachery and death I was still quite confused about exactly how the plot worked ... Catherine Deneuve was as superb as ever, but I was still at a loss about her allegiances ... for example ... indeed, re-visiting after a few months I am still confused!

Beautifully filmed: as always, outdoes its american archetypes. The exactly detailed mechanism of the robbers' plot delightfully stretches things a bit far ... plots like that tend to hit snags in real life and Melville is being ambitious ... robbery on a train from a helicopter flying overhead - can you really believe it? The huge horseshoe magnet to unlock the train door? - but gosh, it is impressive. It may be daft, but if you are going to play the perfect robbery game, and you are Jean-Pierre Melville, go ahead: it will be a masterpiece! Similarly, Alain Delon's cold eyed perfectionism is rather beyond credibility, but why not? Remember to apply your sense of humour and the bizarre.

As always, I longed for french sub-titles – I found the really rapid dialogue hard to follow and the English sub-titles seemed often to vary quite a bit from what was actually said ...