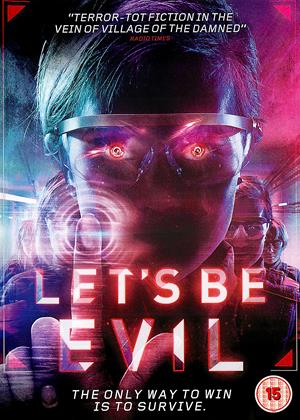 Reviews of Let's Be Evil

All style and no substance, Let's Be Evil follows the Hardcore Henry formula, where its premise overstays its welcome somewhere after the half-hour past mark, and stretches the plot too thin for its own sake. That being said however, Let's Be Evil abounds with novelty in the form of visuals and sounds that perhaps would inspire someone in the near future to try and make the best out of it, and redeem whatever vision director Martin Owen had for this piece of digital bits. As it currently stands, Let's Be Evil is a laughably boring film.

The film’s camera runs via the ASMR YouTube first-person perspective (as in Hardcore Henry) and follows a young adult female participant, who is assigned to some mysterious experiment to watch over a bunch of odd children that are highly gifted and are subjected to an evaluation of sorts. The participant is then presented with augmented reality – AR glasses that change the environment around her and allow her to access additional information just about everything. It sounds cool, but is executed so chaotically that one gets lost in the visuals and cannot follow anything in regards to the plot, if there is one in the first place.

Soon, our heroine realizes a thing about the peculiar children: they’re way more gifted than what she was initially told and in turn are inhumanly treated, while all their activities are being monitored by the conductors of the experiment. Soon, our heroine questions her moral understandings and puts the ‘rights’ and ‘wrongs’ opposed to one another. Needless to say, one clearly outweighs the other.

The set throughout which our heroine moves is claustrophobic, but it ultimately ends up feeling under-budget and too ‘flashy’ for its own sake. The editing feels choppy, rushed and amateurish. The only salvageable thing this film has going for it is its ambiance (thanks to the color palette) that almost feels like floating into a wormhole of an alien civilization that watched too many 80’s Michael Jackson video reels on VHS, and decided to transfer the coolness into the pathway to outer dimensions.

It doesn’t make sense, I know, but then again – so does the movie.

Let's Be Evil just sounds evil, but the movie, and trust me when I say this: is not. The only evil presence it (pretends) to have, besides the vomit-inducing camerawork, comes in the form of seizure-inducing visuals that assault both the mental and the senses of the physical well-being. So much for horror, it seems.

And finally, Let's Be Evil manages to pull off a good soundtrack in the likes of Stranger Things, It Follows and the older Far Cry: Blood Dragon FPS, but doesn’t bother with anything else.

Not the worst, but most certainly not the best of films.