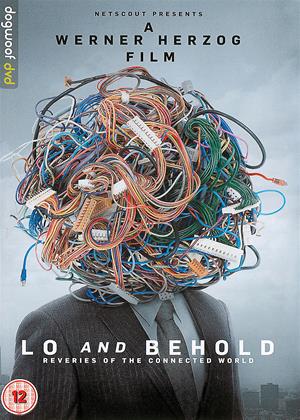 Synopsis:
Academy Award-nominated director Werner Herzog chronicles the virtual world from its origins to its outermost reaches, exploring the digital landscape with the same curiosity and imagination he previously trained on earthly destinations as disparate as the Amazon, the Sahara, the South Pole and the Australian outback. Herzog leads viewers on a journey through a series of provocative conversations that reveal the ways in which the online world has transformed how virtually everything in the real world works - from business to education to space travel and healthcare.
Actors:
Elon Musk, Lawrence Krauss, Lucianne Walkowicz, Kevin Mitnick, Sebastian Thrun, Werner Herzog, Richard Ayoade
Directors:
Werner Herzog
Producers:
Werner Herzog, Rupert Maconick
Writers:
Werner Herzog
Aka:
Lo and Behold, Reveries of the Connected World
Studio:
Dogwoof
Genres:
Documentary, Special Interest

Sign up
The Internet's Own Boy: The Story of Aaron Swartz

Reviews (1) of Lo and Behold

Broad-ranging and interesting - Lo and Behold review by JF

This is a well produced documentary. Perhaps a tad over-long, but then the subject is pretty vast. Put simply, it deals with the technology that we deal with today and the possible technology in the future (computers talking to other computers seems quite obvious nowadays). I'm no geek, yet it held my attention.

Lo and Behold (aka Lo and Behold, Reveries of the Connected World) review by Mark McPherson - Cinema Paradiso

Werner Herzog tends to become enamored with many angles and offshoots when filming his documentaries, but he’s fallen into quite the rabbit hole when tackling the subject of the internet. He hopes to cover it all from its very inception to its possibilities of unlocking secrets of the universe. In many ways, Herzog is the perfect director for such a topic as he’s able to cover an extraordinary amount of ground and pluck the most unique aspects to explore. While he certainly take has a knack for taking simple subjects and expanding them into grand documentaries, I fear he may have only scaled a portion of this mountain, leading me to admit the one thing I have never said about a Herzog movie: This should have been a miniseries.

But Herzog’s usual ride is still as much fun as it ever was in Lo and Behold. He finds the most interesting people to point the camera at who have the most to say about the Internet. Who better to begin the film with then Bob Kahn, the very creator of the protocols for the internet. Though Kahn has been given awards for his efforts, he is perhaps not the name most people think of when they think of the internet. But it’s a name certainly worth remembering for his many efforts over the years that have often gone noticed by the general public in one way or another.

Another name worth noting is Sebastian Thrun, a professor who now specializes in robotics and free education. His latest project is that of developing self-driving cars, powered by artificial intelligence that only learns as it progresses, but delivers that information to other cars. It may seem like a dangerous new invention that Americans may not be as accepting of, relinquishing control of the car to robots. But if you give the public the option to watch Netflix on their way into work, it doesn’t seem as farfetched of a sell for the future.

Herzog doesn’t limit himself to just innovators, however, as he delves into the aspects of online gaming. He speaks with those that have dealt with their lives being affected by online gaming to the point where they needed to go cold-turkey or seek counseling. Indeed, Herzog does interview gaming counselors as well for those who have this addiction to online games. This angle is perhaps better explored in the documentary Second Skin, but Herzog only has so much time for such a topic that he makes the point of its damaging effects and moves on.

Some of the stranger aspects Herzog moves in towards is with the escape from internet technology. He visits a community completely untouched by cell phones, the inhabitants reasoning that their bodies could not stand the radiation they emitted. Away from computers and cell phones, they feel much more healthy and at ease, even if they essentially appear to be living off the grid. Another odd man worth seeking out was Ted Nelson, the man who invented hypertext. He displays a new system he devised for displaying written information on the internet that was not as widely accepted, despite its multi-faceted system for checking facts and related content. Some deemed him a little insane - Herzog believes he may be the most sane of all.

Finally, the movie comes to the inventor and mogul Elon Musk, beginning with talking about technology and eventually the mysteries of the universe. Herzog goes plenty deep into this subject as he speaks with several scientists and inventors about everything solar flares and possibilities of space travel. When Herzog speaks about dreams of the future, Musk mentions that most of his are nightmares - not all, but most of them.

As involving and scattershot as learning online, Lo and Behold is a fascinating documentary to become lost within to the point that it almost loses purpose. Herzog should be able to hold the attention of even the most distracted of the technology obsessed to put down their phones and consider the grander picture of the technological world we occupy. With dozens of stories to tell, philosophies to divulge and mysteries to unravel, it’s a subject that no documentarian could possibly hope to encapsulate within one film. If Herzog hasn’t done it here, he’s at least made a dent by capturing some of this perspective as best as he can, from hackers to developers to gamers to inventors.