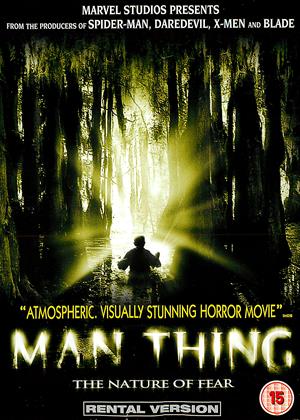 Not in the same universe as the comic ... - Man Thing review by NP

Man-Thing was a monstrous swamp-dwelling creature who starred in a handful of Marvel Comics’ series beginning in 1971. During this time, the company had success with classic monsters Dracula, Werewolf and Frankenstein’s Monster. These characters and others had their own publications in America, which were edited into episodes to form the UK’s ‘Dracula Lives’, which was one of the main reasons for my burgeoning interest in horror. Original Marvel characters were also developed, like Ghost-Rider and Morbius, but none had the staying power of Man-Thing.

This curious film was released in 2005 as a straight-to-television venture, but also enjoyed limited theatrical release. Set in the swamps of Louisiana, but filmed in Australia, it bears little resemblance to the mighty comic strip, which under main writer Steve Gerber, showed Man-Thing had an empathic nature.

The central creature isn’t seen until right at the end of the film. Diminishing budget was probably the cause for this, but when he is seen, he is quite impressive. There are characters in the film called Mike Ploog and Val Mayarik. In ‘real life’, these men provided much of the art for the original strips. Steve Gerber is also named as a character.

Apart from Australian actors assuming American accents with varying success, this is quite a good looking film. Certainly the swamp-lands and scenes of encroaching industria are shot and lit in a very striking fashion. Only the script serves to let things down a little. There is an occasional bout of gore to spice things up, but little in the way of character development, so it isn’t easy to care about them, despite the best intentions of the actors. The whole story serves as a lead-up to meeting the Man-Thing itself, and when he is revealed, things liven up considerably.