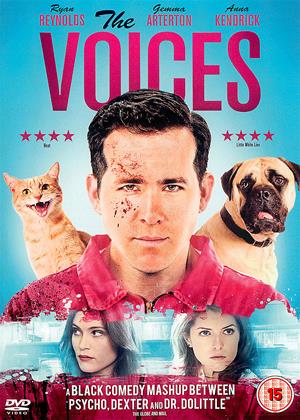 Synopsis:
Jerry (Ryan Reynolds) is an affable loner who works in a bathtub factory by day and hangs out at his flat above a disused bowling alley by night chatting to his pet cat, Mr. Whiskers, and loyal dog Bosco - whose voices he hears. Eager to socialise, Jerry asks Fiona from accounts (Gemma Arterton) out on a date, but when she stands him up he later accidentally stabs her to death, repeatedly, in the woods. Covering his tracks, under strict advice from Mr. Whiskers, Jerry is now beyond the reach of his well-meaning psychiatrist Dr. Warren (Jacki Weaver) and things are looking bad for Lisa (Anna Kendrick) who has taken a shine to him.
Despite Bosco trying to keep him on the straight and narrow, Mr. Whiskers is the loudest voice in Jerry's head and all he can hope for now is salvation.
Actors:
Gemma Arterton, Anna Kendrick, Jacki Weaver, Ella Smith, Paul Chahidi, Stanley Townsend, Adi Shankar, Sam Spruell, Valerie Koch, Gulliver McGrath, Paul Brightwell, Alessa Kordeck, Michael Pink, Ricardia Bramley, Alex Tondowski, Harvey Friedman, Stephanie Vogt, Aaron Kissiov, Kai Fung Rieck, Antje Rau
Directors:
Marjane Satrapi
Producers:
Roy Lee, Matthew Rhodes, Adi Shankar, Spencer Silna
Voiced By:
Ryan Reynolds
Writers:
Michael R. Perry
Studio:
Arrow Films
Genres:
Comedy, Thrillers

Reviews (3) of The Voices

Odd dark comedy made in Berlin - The Voices review by PV

I read a really awful 1 star review of this film so had to rent it! It's an odd international co-production which seems have been filmed in Berlin with an Iranian director...

Basically, this movie is a study in insanity - with darkly comic + tragic tones. A man with mental problems stops taking his meds and so hears his cat and dog speaking to him, encouraging him to kill or not..

It's both funny and disturbing, in equal measure.

One point: I am getting rather sick and tired of cats being portrayed as evil in movies, and dogs as the good guys. Is this because the scripts are written by cat haters? Who knows? But I am sure some of these films lead to animal abuse.

And the way this cat has a Scottish accent is just bizarre - seeing as the main character who is making up the voice was brought up in Berlin until about 10. Maybe an evil character should have sounded like Hitler or Freud or another German speaker?

Some will no doubt be offended by yet another portrait of someone who's mentally ill and gets violent and kills people - when a really tiny number of anyone with mental illness (from depression and anxiety to real psychosis) does so. But then, there isn't much drama in watching someone staring at a wall, is there?

What the hell is going on here? Is hard to work out the comedy versus horror versus quite disturbing.

Basically, having watched the light dance routine at the end, and a really clever performance from Reynolds........took some controling through the film, without looking completely daft............have come to the conclusion the film is pretty unique, and possibly does show, quite vividly, exactly how the world must appear to someone with a genuine mind problem!

At first was on a 1 star, but gone a 4 at the end, as film is really very different to anything else, and is possibly not as banal and stupid asa you first imagine! Try and hook into the angle from Reynold's perspective. Can begin to understand how it is possible for some .......fortunately few....... people to execute the most horrendous acts on to offer people, without and degree of compassion.

Very one-off film. Bit like VW Beetle, you will like it or hate it. At least you will think about it!!

Easily one of the FUNNIEST BLACK COMEDIES I have seen in a Long while.

Starts off looking like a Family Movie ,Good Natured and Romantic and ends like a Blood Splattered Serial Killer Movie.

Well worth a second watch ,im actually off to buy it on ebay .