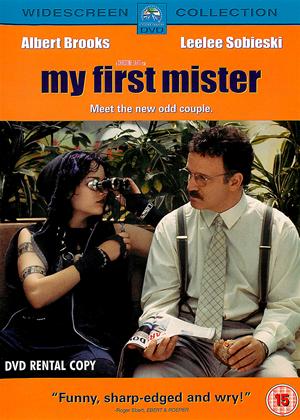 Reviews (3) of My First Mister

A sweet, gentle and touching film. - My First Mister review by CP Customer

I didn’t really know what to expect from this film, and rented it purely on the basis on liking Christine Lahti as an actress and was intrigued to see a film directed by her, and what a wonderful little gem of a movie this is.

The story revolves around the character of Jennifer (Leelee Sobieski), a dark and depressed 17 year old goth complete with tattoos, black makeup and piercings. She is miserable at school, feels misunderstood by her mother, stepfather and father, has no friends, and is desperately in need of someone she can relate to. That someone turns out to be the last person you'd expect, a 49 year old men's clothing store owner named Randall (Albert Brooks). After approaching him for a job he is reluctant to hire her, he eventually gives in and despite their age and lifestyle differences, the two find their dysfunctional lives are irreversibly changed for the better for having met. Luckily this doesn't turn into another ‘older guy, younger girl’ romance. Director Christine Lahti is too smart to let things get so stereotypical, and she’s also wise enough to let viewers discover the hidden depths in Randall and Jennifer, depths that might not surface if sex muddied the waters. Lahti also adds an understated style that charms without being overwhelming or too schmaltzy. Funny, tragic, and smart, this movie should be seen by anyone who wishes they'd make movies ‘like they used to’.

It is not clear why this rebellious Goth falls for a camp, neurotic middle aged man. Unfortunate because this is the central and unremitting tenet of the film. This relationship is not particularly interesting and for the most part unbelievable, even though it is not that unusual. Some of the minor parts are very poorly acted. Very "Hollywood" in every regard.

Waste of poor Albert Brooks. Lame, boring, waste of money producing this movie. Pointless. Sappy. Hard to think of anything positive to say about it.