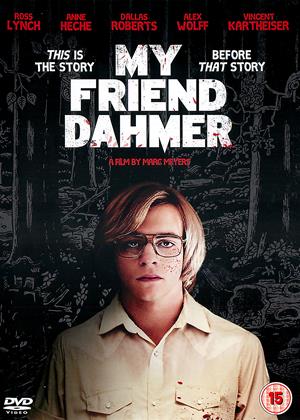 Reviews (1) of My Friend Dahmer

This film is a great portrayal of the upbringing and the shaping of the mind of Jeffrey. Following his journey through school and his parent's relationship breaking down and the friendships he made which seemed to be purely exploitative of him for the groups entertainment. If this film is accurate, then it's clear from the offset Jeffrey was not of the norm and it's up to the viewer to decide if his murderous tendencies were a product of his misfit times throughout the years or always with him. It loses one star as I had expected it to be a horror film and it ends before his first murder so it's not really scary at all and more like a portrayal of who he was before he became a killer. Still worth a watch, shot very well and I suppose it is scary how relatable he was to people we all knew who were 'the quiet ones' at school...

We tend to want answers when it comes to psychopaths. We want to know how this all started so that we can perhaps avoid future murders, assaults, and abuse. Those seeking such answers from My Friend Dahmer, a biopic on the teenage years of legendary serial killer Jeffrey Dahmer, may be dismayed that there’s outright hypothesis for his behavior. The film attempts to humanize the swirling catharsis of his eventual insanity, trying to let us more inside his head than approach with seeking diagnosis.

Ross Lynch plays a Jeffrey with a brilliantly reserved performances, perfectly encapsulating that familiar teen angst that fluctuates between silent fascination and babbling craziness. Jeffrey is seen as a loser of both his school and his family. Students look down on him for his quiet nature and his feuding parents bicker over their son’s unhealthy interest in chemistry most dark. His father would rather he lift weights and date girls, to the point of meekly trying to throw weights in his directions.

But then Jeffrey makes a breakthrough. After being rejected by everything, he makes a scene; a freakout in the school hallways. He throws his papers up in the air, starts screaming wildly, and conversing on the floor. Suddenly, he’s no longer a speck of the system but an outside who quickly gains his own fan club within the lunchroom. A collection of outsiders take an interest in his stunts and decide to follow him for the entertaining chance to witness him pull another Dahmer style freakout.

We quickly start to understand Jeffrey desire for the deranged. His parents are such a mess of mental disorders and bitterness that he adopts with the coping of booze and animal mutilation. There’s no hope for him at this point, as everyone only spots him as either a kid in need of a whooping or a carnival freak. This is his life and it’ll only grow darker from here, a future we already know that the film doesn’t need to showcase.

Director Marc Meyers keeps his film very atmospheric so we can delve into Dahmer without the clearest cut scenes of where everything went wrong. Like all madmen of criminal intent, it’s a collection of swirling sins and influences that drive him off the deep end. We merely watch as the tension looms of the eventual snapping of his mind into violence against others, the desire mounting higher and higher with each exchange. The boiling is intriguing to watch, thanks to Meyers’s direction that, even when we know Dahmer won’t kill this person, we can see it possibly happening if just a few elements didn’t fall into place.

Contrary to the film’s title, My Friend Dahmer doesn’t attempt to overly humanize and sympathize with the troubled teen, nor does it want to demonize him with easy theatrics. We’re merely served up a confounding picture of the killer in the making and take from it what we will, delivered in an unforgettable performance by Ross Lynch. Being filmed in Jeffrey Dahmer’s hometown, there’s an essence of the hopeless nature you can feel for one such as Jeffrey, where there’s no help for a quiet kid who is so lonely only the most daring of theatrics would get him noticed. The sad part is he was right; had he not become a serial killer, this type of film would not expect and he’d merely evaporate into the Ohio ether of nerds and dorks so quiet they faded into obscurity.