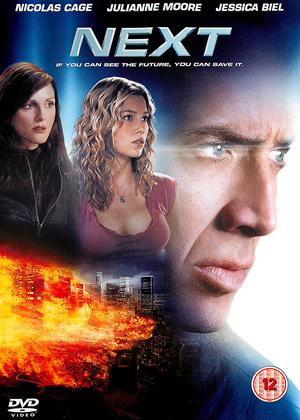 Sign up
The Mummy: Tomb of the Dragon Emperor

Good thriller with great twist - Next review by CP Customer

Nic Cage is good in this role as a Las Vegas magician who has a genuine ability to see a few minutes into the future. The story revolves around his quest to find the woman who he thinks is 'the one' whilst being tracked down by the FBI to help them find a terrorist bomb. The film isn't perfect and I found some aspects of the plot a bit thin, like who are these terrorists and why are they doing this? However, the story revolving around Cage and his girlfriend is good and the ending is terrific. Some good action sequences too.

Something to do... - Next review by CP Customer

I quite enjoyed this film and would probably say it is worth a watch if there is nothing else to watch. Nicholas Cage is a guy who can see 2 minutes into his own future and therefore constantly changes his future when he sees something bad coming. He is wanted by the FBI to help with a terrorist attack but Cage is a little reluctant.

The film is a little far-fetched in places and the ending was watched with a frown (but I won't spoil it for you!)

Nicholas Cage's character came across as a little sleazy - although I don't think it was supposed to (think it may be the long hair again, putting me off, lol). He is a great actor in some of his movies (Gone in 60 seconds , National treasure etc) but I wouldn't say this is one of his greatest performances.

Also... a little treat in store with an appearance from the great Colombo!! (Peter Falk)

quite decent scifi - Next review by CP Customer

action and explosions, worth a watch as you will be entertained and wether enlighted in life? I dobt, but hey is cinema at its best,

entertaing and exciting if a little missing