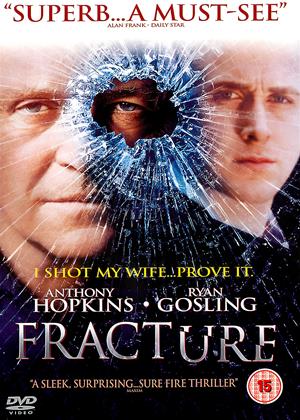 Anthony hopkins is always good value and a movie with him in is always worth a watch.Don't know the co star(Ryan Gosling), Should I ?

Without giving to much away the plot involves Mr hopkins Murdering his own wife, admitting to it, giving a written statement and basically putting his hands up and saying, it was me.Well obviously its not that simple.Ryan Gosling plays a hotshot lawyer who is just on the verge of promotion, decides to take one last job an easy "Murder with confession".

Herein lies the beauty of this film, the plot twists and turns from conception to completion and you never really know whats going to happen.The time never dragged whilst watching this film it totally ronsealed me and i left the cinema feeling totally satisfied.The only thing that bugged me was, why does a medium popcorn small drink and a bag of penny sweets cost over £8.What gives!!!

excellent thriller.but honestly did you not guess the ending, not see it coming half way?,how he did it???

Where was Hopkins? Is this a retirement booster? I have never seen such a poor performance. The rest of the actors fill the usual hero falls in love with girl background rubbish that you expect. None of the acting was interesting. I hope the plot is used again as there are lots of twists.

This is an excelent thriller and I don't think it really matters if you work out (which is likely and exactly what we did) how Hopkins did it. It doesn't spoil the film as you're then intriged as to how he is going to get caught.

It's not a classic, but as the above reviewer said - it's a Ronseal!

The Prosecuter Try Very Hard TO Make It Legal.

Anthony Hopkins at his evil best - Fracture review by JB

What a great film, it really should have had some awards. The film was riveting and kept us guessing right to the end.

Watch this, good thriller with Hopkins excelling as the master of intrigue. Plot only resolved in the last 10 minutes so will keep you

guessing for the duration of the movie. If you like thrillers you will love this. Well worth 5 stars - in my opinion !

This is quite an ingenious story, and could be the heart of a great film, however the dreadful script and lame editing make it a very dull affair.

There are poor visual clues to aid the story for the viewer. Any great thriller must have enough clues to keep the viewer informed. The dialogue is very shallow, uninvolving and often unintelligible. There is no development of characters, and conversation is trite and childish. The relationship between the detective and his female boss is one dimensional and so embarrassing.

It's a good example of how a great story can be ruined by a third rate screenplay and juvenile directing.