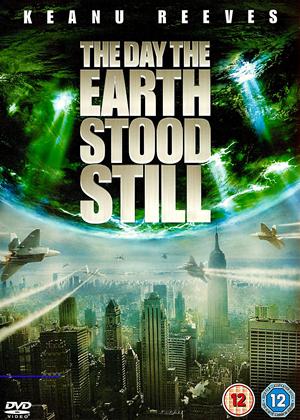 Rent other films like The Day the Earth Stood Still

Reviews (5) of The Day the Earth Stood Still

Oh Dear, If you liked the long slow pauses (as if thinking hard) in The Matrix this film is for you. It seems that After his first few attempts into SciFi Keanu found a formula that worked for him in Matrix and is sticking to it. I appreciate that he is supposed to be an alien in human form but if all aliens have no emotion then we as a planet, and SciFi enthusiasts, are stuffed.

Dont waste your time. The film is all in the hype.

So much hype about this film so decided to give it a look.

Its a film of Keanu Reeves walking slowly mostly towards the camera, in a suit.

Typical Amercians against the aliens

The original is a masterpiece this is a cheap remake.

Enjoyed this film immensely as it was very realistic given the Earth's present predicament. The real downside to this film is it only related itself to one of Earth's major problems at the moment whereas it could have at least related to the fact that the world will not be able to feed itself with the immense increase in population as well as the many other human falacies that continue to amaze yet the human race fails to do anything to close up the loop holes that creates these falacies. A good watch with a heart warming ending. Particularly liked the bit where the alien answers the scientists canumdrum whereby John Cleese asks the alien if it will really work! Reminds me of another film but cannot remember which film? The film still leaves you wandering if the human race can save the planet although we will probably do what we did before? A select number of human beings or their essances will be transported to a new world to recommence the cycle all over again! Subject of another film?

The Day The Earth Stood Still is an unlikely B-movie selection to receive a lavish reinterpretation. No expensive has been spared with Keanu Reeves taking the role of Klaatu, armed with a series of expensive and epic special effects. The original was very much a by-product of 1950’sUFO speculation and the Soviet menace. This update refocuses on our errors as a species and how we are killing the planet. Any sense of fear is removed in David Scarpa’s script, with Klaatu’s protector relegated to a shallow Transformers-esque cameo. Jennifer Connelly performs admirably, trying to make an emotional connection with Reeves, whilst dealing with a spoilt brat and his own tiresome side story. The pedestrian directing from Scott Derrickson is amazingly bland, almost diminishing the special effects to a sideshow. Despite all the money funnelled into this project one cannot help it’s a homage trip for those who decided to resurrect the original in such a politically correct format. The Day The Earth Stood Still may find a home with those who enjoy such huge blockbusters, yet many will feel letdown upon its conclusion.

Not knowing anything about the 1951 original film, except it had a cult following, I came to this remake with an open mind and thought it could be a decent sci-fi thriller with a good underlying ecological message. But I'm sad to say this big budget remake is a bit of a dud, it’s not that it’s a bad film by any means, it’s just not that good either and compared to films like ‘Cloverfield’, and even the now 12 year old ‘Independence Day’ it’s inferior in every way. One of the biggest problems is the cast who are completely wrong for this type of film. Jennifer Connelly is a fine actress though in certain roles she can often come across as dull, wooden and one dimensional, and this is one of them. The usually superb Kathy Bates gives one of the blandest performances of her career, and Jaden Smith is a shameful example of pure Hollywood nepotism, if this kid wasn’t the son of Will Smith he would be lucky to get the odd commercial and minor TV role. At least Keanu Reeves was consistent, giving the exact same lifeless performance that he gives in every other film he’s in. The direction is nothing special; Scott Derrickson paces the story by slowly revealing information in order to create some sort of tension, but this just comes off as slow and unexciting. The special effects are decidedly average, and certainly not worthy of the films $80 million budget, and there are so many plot holes in the story it often borders on farcical. Overall, if you’re short of titles to add to your rental list this is something to consider, just don’t expect to be blown away.