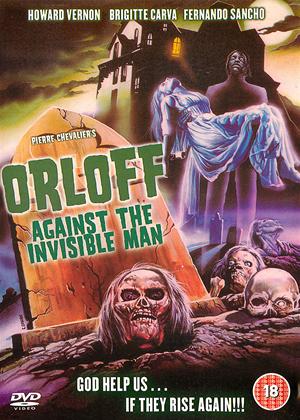 Rent Orloff Against the Invisible Man (1970)

Rent other films like Orloff Against the Invisible Man

Reviews (1) of Orloff Against the Invisible Man

Spoilers follow ... - Orloff Against the Invisible Man review by NP

“Who sent for me to see the master of the house?” asks Dr. Garondet (Frances Valladares).

“Then who should I ask?” persists the doctor.

“Me,” replies the menial.

Some of the English dubbing occasionally threatens to tip this French/Spanish horror film into farce. Such ill-advised dialogue never gets a hold though, and it is entirely possible to enjoy this effective mad-scientist story. Orloff is played by Jess Franco veteran Howard Vernon, who once again is excellent in this mad-eyed role. Director Pierre Chevalier might lack the imagination of Franco, but his straightforward style makes great use of the locations and doesn’t shy away from various unnecessary scenes of young ladies disrobing.

Garondet is called out in a storm-lashed night to the mysterious Orloff’s tremendously gothic chateau. Such is the ferocity of the storm that Garondet stays the night in the company of Orloff, his allegedly deranged daughter Cécile (Brigitte Carva) and the invisible man/creature Orloff has created.

The story seems a kind of mix of Dracula (Garondet’s trip to the castle is more than a nod to the classic vampire story) and Frankenstein, with Orloff as the insane experimenter. With an invisible ape-man thrown in, we end up with a weird and not unenjoyable tapestry of horror elements, with wonderfully creepy gothic tunnels and a hero with the most garishly red lined cloak. The invisible man-thing of the title isn’t the focal point of the film until the final reel, his longest scene being the rape of the young housemaid in a stable (the sight of an invisible character indulging in the sex act has to be seen to be believed). This and his brief reveal are the film’s most eccentric moments.

This is a definite oddity. Jess Franco-esque, muddle headed and lacking a satisfying ending, this is what I suppose you might call classic Euro-horror from the 1970s. An ape-man with an insatiable desire for sex and mayhem is one thing, but an invisible one is a different budget-free ball game entirely.