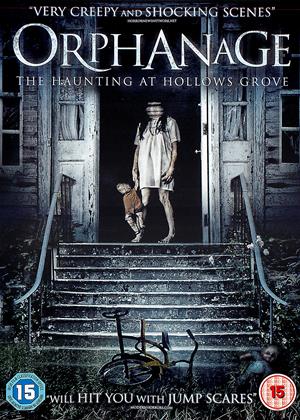 Synopsis:
A young filmmaker is making a behind-the-scenes documentary on his ghost hunting reality show friends, the Spirit and Paranormal Investigation Team. They head out to film an old, abandoned and supposedly haunted orphanage, a place with a creepy history: Two nurses committed suicide there, and one troubled young girl had a penchant for slitting people's throats. Before going in, the group meets with Bill, a special effects whiz who always rigs up their destinations with gags to insure great footage. Once in the orphanage, though, things start to happen that suggest the place really is haunted, and that the crew may not make it out alive.
Actors:
Mykelti Williamson, Lance Henriksen, Matthew Carey, Sunkrish Bala, Bresha Webb, Val Morrison, Matt Doherty, Eddie Perez, Gary Sievers, Tanc Sade, Lindsey Smith-Sands
Directors:
Craig Efros
Producers:
Craig Efros, Mel Efros
Voiced By:
Michael Scott Allen
Writers:
Craig Efros
Aka:
Hollows Grove
Studio:
High Fliers Video Distribution
Genres:
Horror

Unavailable
The Witch in the Window

Reviews (1) of Orphanage: The Haunting at Hollows Grove

With their tongues firmly in their collective cheeks, a crew of television ghost hunters (lead by the diminutive and highly irritating Tim Royce, played by Matt Doherty) are reluctantly given permission to investigate an abandoned children’s orphanage.

One of the benefits of this style of found-footage stories is that, as the characters acquaint the viewers of their filmed footage with information about the building, we – the audience – are also being fed information that feeds our own feelings about the scenario. Equally useful is the less-than-serious attitude of the characters; when strange things begin to happen, they all assume one of their number is responsible. After all, they are filming a ghost-hunting entertainment show. The creaks and shadows are probably the work of their resident effects man, Bill (an underused Lance Henriksen) … well, aren’t they?

No matter how puerile their humour is to begin with, the crew’s hi-jinks serves a purpose too. The contrast between that and their more panicked, more real reactions later on is marked. And matters do become persuasively creepy. ‘Grave Encounters’, a similar project from 2011, seems to have been set up as a benchmark for this kind of film, and there are pleasing similarities – with a TV crew in an old abandoned building, there are bound to be.

The cast is very good. Only the breath-taking Bresha Webb as producer Julie fails to convince, although there is a post end-credits sequence that redeems her performance somewhat.

You’ll probably have seen this kind of thing before, but not always this enjoyable in the execution.