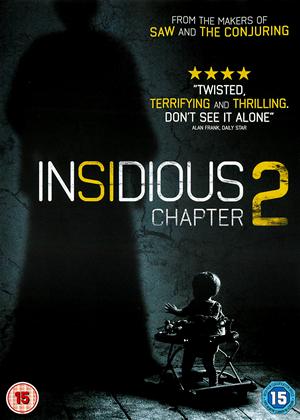 Not as good as the first or the conjuring - Insidious: Chapter 2 review by AW

Watched this late last night and to be honest i struggled to stay awake. Too much back story and really cheap non scares. Inferior to the conjuring in almost every way. 6 out of 10

I didn't think it was as bad as some say, I enjoyed it throughout , it kept me watching all the way through.

I thought the first one was awesome as it had something original ie the astral travelling BUT chapter 2 was just trying to create the same frills all over again but this time with a ghost story instead which is not very original! OK there were more frights and jumpy moments but closer to the end it was just like a repeat of the first but not as good.Yes it had some originality like the story of the father etc but it was not a good sequel; as a stand alone film I would give it a 6 out of 10 but as a sequel its a 4 out of 10; it was quite poor and I got very bored.

This year audiences have been gifted two different horror films from acclaimed horror director James Wan. (The other being The Conjuring) The only problem is that both films are derivative, badly filmed messes that forget about their stories at the halfway point (or earlier) in favour of making you jump a few extra times.

Following on front the first installment, Insidious Chapter 2 tells the continued story of the Lambert family. When patriarch Josh (Patrick Wilson) starts displaying strange behaviour his wife Renai (Rose Byrne) starts investigating as to if the spirit they thought they had stopped has actually gone. When strange things start happening again they search for help from anyone as Josh’s mother Lorraine (Barbara Hershey) starts investigating on her own.

As Josh gets progressively creepier the film loses itself in a mess of plot twists too convoluted to even mention. Wilson and Byrne try to hide the films obvious flaws but this second edition proves a poor copy as Wan finds himself serving two masters, the original viewer and the fan. The films opening while acceptably open for a new audience is slow and never ending as Wan tries to ramp up tension much like he did with the first act of The Conjuring, failing to realise he is using the exact same bag of tricks, turning this psychological creepfest into something less.

The films conclusion while wrapping up the Lambert storyline gives in to the possibility of a third feature in this dying franchise. While Wilson gives good villain and Byrne is a charming presence on screen this really is just cookie cutter horror that has little worth celebrating as people get scared, run around and find themselves pushing against locked doors for most of the films runtime. The whole film feels meaningless and while you can watch it as a mindless scarer, you might just feel like these characters, helpless.