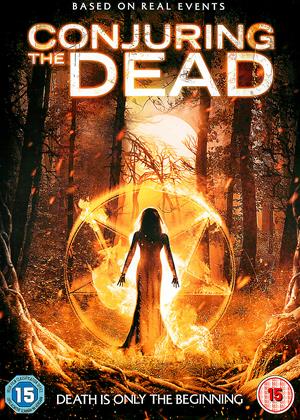 Reviews (2) of Conjuring the Dead

not good - Conjuring the Dead review by gazmb

This wasn't very good at all , poor story and script and the acting wasn't that good either , couldn't watch it all . Don't waste a rental

Featuring some of the cast and crew of Andrew Jones’ earlier ‘Theatre of Death/Midnight Horror Show’ from the same year, this low-budget horror doesn’t quite embrace the unnerving intimacy of his earlier film. This is a tale of Londoner Kristen Matthews (Rachel Howells) moving into an inherited house in Wales, where she meets with a small coven of white witches.

A local spate of suicides (which turn out to be fairly superfluous to the story) in the Welsh village find themselves puncturing Matthews’ dreams in such a way she believes she may have some connection with them.

The storyline is pretty thin (and doesn’t stand up well under close scrutiny), but the pace rarely slackens. That’s not to say this is edge-of-the-seat stuff by any means, but that isn’t its mission. It is a solid, atmospheric slice of rural folk-horror. By opening up the locations, as opposed to keeping things tight as in ‘Theatre of Death’, some of the weirdness that made the earlier film so attractive is missing, and open air locations lessen the control Jones has over them compared to more claustrophobic surroundings, and whereas ‘Theatre…’ created its own world by odd, close-cut angles and sickly lighting, this is more prey to real weather conditions. I compare this to the earlier film so much because so far - along with the gently impressive ‘The Last House on Cemetery Lane (2915)’ - these two projects are all I have seen from the ever growing stable of Andrew Jones’ films. His North Bank Entertainment company produces a regular horror output and despite the results here being good rather than great, there is a definite love and feel for the kind of horror I enjoy: understated, low budget, sincerely played and quietly unnerving.