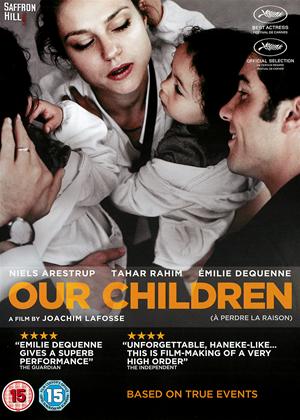 Reviews (1) of Our Children

Wow! - Our Children review by BE

What a very clever film. A bleak tale told with the characters portrayed by exceptional and seamless acting. It stays with you. Although the opening scenes give an indication of things to come, as the film rolled, I forgot about this until the end. Full credit also to the director, Joachim Lafosse. A rare occasion for me - I shall watch it again in the near future.

The idea that someone's life can be taken from them even if they have the freedom and rights to do anything they want is an unconventional one, and one hardly seen on film but Our Children depicts the slow and unintentional corruption of a life and it proves truly shocking.

The film follows the relationship between Murielle (Emilie Dequenne) and Mounir (Tahar Rahim). As the two start to build a life together they feel the constant presence of Mounir’s adoptive father Andre (Niels Arestrup), one that begins to take its toll on Murielle who starts losing herself as Andre begins to take more and more away from her. However when the couple start a family, Andre begins to take a much more active role in their lives, something that could cause unintentional destruction.

Directed by Joachim Lafosse, Our Children is all about pride, the pride that can force someone to do horrible things for the sake of saving face. Although the film doesn’t really have a villain, the life that Murielle and Mounir create with their children and Andre is so toxic that you can’t help but blame everyone to some extent. The films conclusion, a mixture of horrifying suspense and devastating realization, is almost inevitable as Murielle starts to lose her freedom under a mess of foreign traditions, child rearing and walking around on eggshells to appease Andre.

Filled with plenty of rich psychological elements, Our Children is filled with plenty of impressive performances and clever allusions but it never really surprises as the film opens with an unfortunate flashforward that mutes the film’s story. Dequenne and Rahim are excellent and the film creates some delightful ambiguities to play with at the end but it never really grips the way through as the tale is more than hinted at in the opening moments, essentially removing the terror from a terrifying tale.