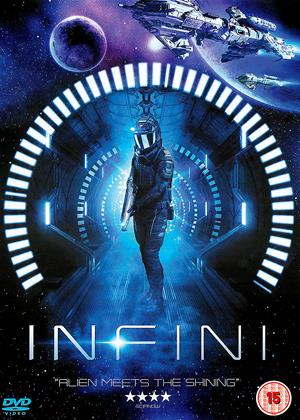 It could have been an OK movie if the story made sense (taking place in the future doesn't make it "Sci-Fi") and actors knew how to act...

I agree with the above review at the end of the film nothing was resolved and it all seemed pointless !!

Starts a bit slow..thought at first it was going to be a really Low budget and crappy movie, so started to regret my choice but ended getting much better once on the go. Bit limited with story , but ended up being entertaining enough . Not a block buster like Alien obviously but for a lower budget ,interior based Sci fi it passed muster . not dissimilar to many other movies in space stations or on alien planets that face disaster .claustraphobic and running too a fro down corridors with guns shouting ..... think Pandorum or Doom . wouldn't bother seeing it again, but i certainly enjoyed seeing it once .

Infini treads on very familiar territory in the realm of space marines combating an outbreak inside a lab. We’ve seen it before in movies that do it right (Aliens) and movies that do it oh-so-wrong (Doom). Infini falls somewhere in the middle as a movie with lofty ideas on a decent budget. It avoids the shortfalls of cheaply produced science fiction and the pitfalls of big-budget sci-fi action bonanzas. Though never truly amazing, Infini never annoys or unintentionally amuses either. I suppose that could be considered a victory of the filmmakers working within their limitations.

The futuristic setting of space mining works well in that it doesn’t try to be overly showy. Troopers transport into a medical facility with instant transmission of their particles. The effect doesn’t contain any bright beams of Star Trek effects to make it seem grander than it should be. It’s actually quite believable the way it makes humans convulse and shake until their molecules disassemble and reassemble somewhere else. It’s a rare case where a movie on such a budget would make such a smart decision to save what little special effects money there is for better shots later on.

The story is fairly standard if you’re familiar with movies like Alien and video games like Dead Space. A strange outbreak has occurred at a space-mining site off-planet and the only one left alive is first-wave trooper Whit (Daniel MacPherson). The mining operation is filled with your typical sci-fi environments that include plenty of grates, labs and smoke filled corridors. After the first unsuccessful attempt at rescue, a second unit is sent in to save Whit and anybody else who may be alive. And, of course, things go horribly awry once more as the outbreak spreads to the space troopers that become infected and crazy.

This all sounds fairly standard and for the most part it is. Whit secludes himself in a tight spot of the station (like Newt from Aliens) and takes on the infected crew as a smart soldier (like Ripley from Alien). Even the design of the cities for this futuristic world seemed like they were ripped straight out of the Blade Runner style template. But it’s the narrative and direction that save such a premise from becoming a mess of repetition. Aside from the opening text, director Shane Abbess lets us get straight to the action. We’re introduced quickly to Whit’s life at home, his mission that goes awry and his current survival struggle. Doing so allows the thick theme of survival and human sanity to take shape earlier in the picture than expected.

Many of the usual motions are still present, however, as the soldiers bicker and scream at each other while waiting for their extract. For featuring so few bodies, the movie doesn’t waste anytime trying to kill them off at an alarming rate. The insanity-causing virus - which turns others into babbling killers ala The Crazies - spreads through simple exposure. The splattering blood can infect a high number of those in proximity meaning that kills need to be clean. Of course, that’s a tough order given the abundance of military guns and the destructive nature of the infected.

While Infini doesn’t exactly impress with its trapped-in-a-space-lab thriller script, it at least has decent production values. The closed sets look great, the tension is fairly consistent, the actors are all trying their best with their limited roles and the perspective of losing your mind to a crazy virus is pretty unique. Given the type of film Infini could have been, director Shane Abbess turns in a modest effort that manages push more of the right buttons than the cliche ones. I couldn’t stop thinking about the superiority of films like Alien over Infini, but I certainly wasn’t regretting my time spent with this little sci-fi thriller that aimed to be just a tad different. It may not shoot for the stars, but it does pretty well at breaking the atmosphere.