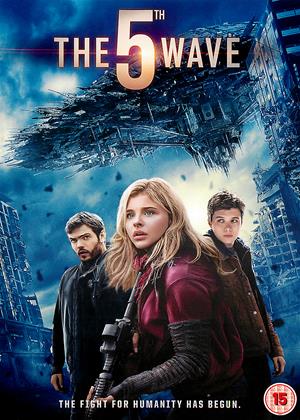 Q, How to make a Sci-Fi Movie look Passable without any Budget for Special Effects ? ...A, Make the Invading Aliens Look Exactly Like us ! ...BORINGLY DULL. not a lot happens,not a lot of interest anyway. but if you count the times she drops the Damn Teddy Bear it makes an interesting game until it finishes.

The 5th Wave plays it so generic and safe within the genre of young adult dystopia that it might as well be a parody. How many times must we watch a young girl dart through the woods with a weapon as she is hunted down by invading forces? Choosing not to hide its bland nature, the movie begins with this exact scene with few surprises in her actions and dialogue. I sigh in disappointment as I could sense the hand-holding of a story that may as well have been titled “My First Young Adult Movie.”

I really don’t want to divulge the story as the script spends an awful long time being expositional about all of it. Here are the basics: aliens attack Earth, but take their time in wiping out the human race. After having their fun with floods and the flu, they move on to assuming the roles of human spies to instigate fear from within the race. Cassie Sullivan (Chloe Grace-Moretz) plays our protagonist as an average high school teenager that must adjust to firing a gun and looking after her brother Sam. When the two are displaced, they both have different adventures in seemingly different genres. Cassie wanders the deserted lands of America being targeted by snipers and eventually stumbling upon her love interest for the picture. Meanwhile, Sam is taken by the remainder of the US military to be trained as a soldier in the war against the aliens. I don’t feel that bad in revealing that Sam’s arc has an Ender’s Game style twist in that it’s not nearly as shocking as it is predictable.

Look, I don’t want to compare The 5th Wave to the stronger themes of Ender’s Game, the societal disconnect of The Hunger Games or even the showier visuals of at least a dozen other well-produced alien invasion pictures. But even when compared to the base level less-expensive TV dystopian tales such as V or Revolution, The 5th Wave just appears as a watered down version of all that has come before it. The aliens and their ships are rarely seen - most likely because of budgetary constraints and that they’re just not interesting enough. We’ve reached an era where television dystopia trumps movie dystopia. The most that the movie can boast is one great scene of exploding cars as child soldiers flee from the flames. And that’s only if you’ve never seen a car explosion in a movie - “My First Action Movie.”

There is nothing to be invested in with such cheap direction. We should feel something for Cassie’s loss of innocence going from average high school girl to gun-toting warrior, but the picture glazes over this transformation. One moment she’s making small talk with her classmates and the next she’s being shot in the leg by snipers. There’s nothing to feel from her journey - the bullet that hits her leg does not hit our hearts. This is due to the casual and breezy nature of the whole picture, where characters simply go through the motions without much development. Characters will look up at the sky for aliens, cry for their loved ones and coldly force their way through combat without any emotional weight. Should an alien invasion that results in massive loss of life be so light? Perhaps the filmmakers were too fearful to craft something so dark for a preteen audience, but the popularity of The Hunger Games and The Maze Runner has proven that kids can handle the darkness. They don’t need to have this thin genre carved down further to be age appropriate, if you even want to call it that.

As the standard set by The Hunger Games continues to duplicate over time, the degradation of these young adult stories becomes more prominent. And The 5th Wave is that ugly little experiment which marks a clear sign that the genre has been reaped dry of creativity. There is no engaging story up on screen - just tropes that have been artificially produced for the desired results. It is a product so coldly manufactured that I couldn’t help bursting out in laughter for the obligatory moment when Cassie stumbles upon her love interest bathing in a lake. You don’t get more ridiculously cliché than this.