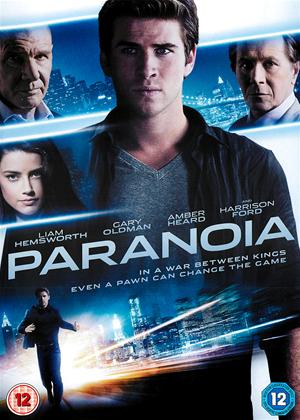 Finding his groove outside of the Hunger Games may well be a little painful for Liam Hemsworth, as well as for audiences as films like Paranoia spring up trying to capitalize on his so called popularity instead of the promise of a performance that doesn't produce more than pouting and strained emotions. Paranoia is a depressing film to say the least, as it wastes popular and respectable actors in the name of a half baked conspiracy.

The film follows Adam Cassidy (Hemsworth), a software designer who finds his little life in a small office upended when he is blackmailed into corporate espionage for his boss, Nicholas Wyatt (Gary Oldman). He is tasked with getting close to fellow software mogul Jock Goddard (Harrison Ford) and steal his new creation, something that can change the face of technology. However the risks build to a tipping point.

There are very few films that work because their lead character is completely repulsive. Films like Taxi Driver work because the lead is a twisted and unlikable person. It's hard to get excited about conspiracy and supposedly thrilling events when the man leading you through them is am unlovable manchild, a disastrous friend, person and boyfriend. Not once does he do anything remotely responsible and while the film treats it as endearing it's actually somewhat tragic.

The script makes stealing secrets from multi billion dollar companies seem like putting together a set of shelves, time consuming but perfectly doable for the average man. Not only does Adam get away with some of the dumbest spying on film but he doesn't hold up the films simplistic story, Hemsworth lacks gravitas.

The whole thing feels staged, crafted by execs and not writers and it never once convinces you that this tale is worth caring about, worth devoting your time and energy to. It only succeeds in providing an unintentional hilarity to the proceedings, something it never intended to achieve but still, its hard not to watch Paranoia and not find It oddly hilarious.