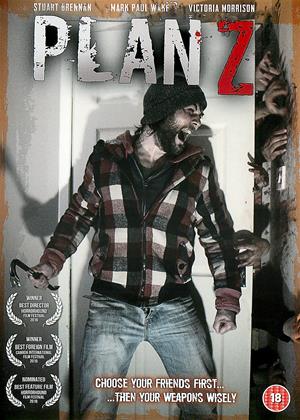 As plans go, Plan Z isn’t the greatest. It consists of stocking up on supplies and then staying indoors until the food runs out before heading off to ‘somewhere quiet.’ It deals, of course, with a zombie outbreak, illustrated economically by scenes of the slowly staggering Living Dead smeared with blood amidst a few overturned cars.

The decision to leave for the countryside occurs 28 days after the initial outbreak (as an onscreen caption tells us) which makes it pretty clear where this film’s influence comes from. ’28 Days Later (2002)’ was a ground-breaking UK success, which this clearly does not have the budget to emulate. And yet, by confining much of the initial outbreak to the area surrounding Craig, a very isolated man, we are treated to a very personal, even intimate vision of the apocalypse that negates cities bathed in CGI twilight and hordes of decomposing trouble-makers. Craig is played by Stuart Brennan, whom also wrote and directed this. His sole friend for the first half is Bill (Paul Mark Wake).

Much fleeing from underwhelming cadavers ensues, often to the music of a soft-rock music soundtrack. As they travel to the Isle of Skye, they meet up with a few more people including Seren (Victoria Morrison), who has the annoying habit of chuckling after every pronouncement. Sadly after this time, such a story as there is has run out of steam. Listening to the characters’ earnest strategies and travel arrangements punctuated by curiously gore-free zombie attacks soon becomes, if you will, pretty lifeless. It is as if the crew suddenly lost interest and decided to end production as soon as they could.

Good bleak landscapes evoke a feeling of desolation amidst this minimalist outbreak, but ultimately ‘Plan Z’ doesn’t have much of story to tell.

Without question the worst film I have ever watched . Must have cost about a fiver to produce and acted by people having a laugh at your expense !!! IR