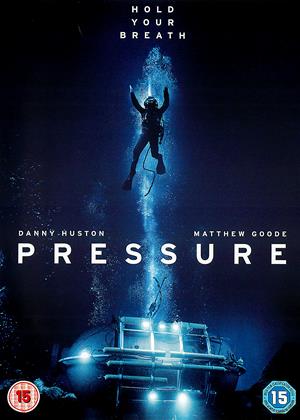 Pressure is the type of military survival drama fit for a Tom Clancy junkie. It features lots of submarine drama where an incident causes a handful of officers in an isolated diving bell to find a way to survive, using all their smarts of the tech to get out of the situation alive. Also indicative of Clancy is a rather tone-deaf sense of losing one's mind and longing for the lust of a woman, where one officer hallucinates a nude woman in the ocean he caresses and is savaged by. Yep, it’s that kind of wonky military movie.

The four men in question are working for an oil company on a vessel currently in the Indian Ocean. Everything seems to go rather smoothly and blandly without much character, the script more concerned with the specifics of manning a submarine and a diving bell than anything else. We don’t get to know much about the four guys sent out into the diving bell past the simplistic attachments. Some have women waiting for them and others do not.

Then a storm hits and the diving bell is stranded. The four crew members now need to either find a way back to the surface or rely on other nearby subs and boats to come and rescue them. They have limited oxygen and venturing out into the black abyss of the ocean only risks their lives further. Tough calls are made during this survival mission about how to preserve oxygen, how to maintain damaged tech, and how to keep the sanity present.

Pressure certainly has a lot of production values behind its staging of the diving bell and submarine, as well as some decently dark scenes within the ocean setting. But, ultimately, the characters are so watered down there’s little desire or tension in whether or not they’ll make it out alive. What more past the typical and tired tropes of survival does the film have to offer with these characters? You can throw as much keen knowledge of underwater workers as you like but if we don’t care for the characters, we’re ultimately left with a slasher movie. But what kind of slasher? Are we supposed to be rooting for the ocean that sucks away their oxygen, the storm that hinders their escape, the Chinese boat that doesn’t get to them in time, or the hallucination of a naked woman?

I’ve seen this film a dozen times; the submarine drama that shirks the dynamic for the favoring of the tools, as though we’re more compelled by the grip of an oxygen tube than anyone aboard the diving bell. I can’t help but feel the slew of submarine thrillers that have followed in recent decades was a result of The Hunt for Red October. And I can’t help but feel what many took away more from the film was how cool submarine tech is as opposed to the compelling dynamic of how the subs are used for international politics and mutiny.

I’m sure for the Popular Mechanics enthusiast that Pressure has a certain appeal more for the gritty and glistening tech than its mundane men of mumbling machismo. But for all I know the film probably gets so much wrong in its staggering stumble of staging shouting and tough decisions at the bottom of the ocean. And if that’s the case, what more does Pressure have to offer? Milqtoast men bickering in uniform and having the most boring of hallucinations? A naked woman for no reason? Not exactly the best of drama involving a submarine; perhaps the worst I’ve seen in this small subgenre.