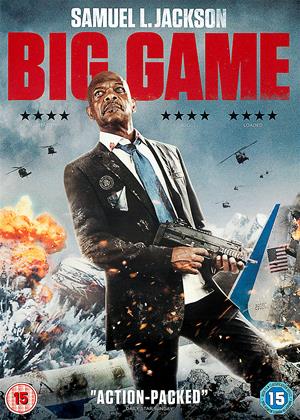 Accepting that we all have to work...... SLJ should know better.

The plot to this film is preposperous.

this film is ridiculously far fetched! As if someone can roll down a mountain and be transported in the rapids in a fridge without any injuries is crazy. However, it was entertaining but I would recomment it for kids only as it is action packed.

Sam does another film. - Big Game review by NC

Cannot remember when S Jack last did a good film? Neither can I. Would put this one in as a fairly reasonable kids film.

This could have been such a good film, if it weren't for the usual boring arrogance of America, where they continually and falsely remind us that they are 'The Greatest Nation on Earth' and the President is 'The Most Powerful Man on Earth', 'Leaders of the Free World' and all the other cliched egotistical comments the Yanks seem to believe in! Given that most of the cast, production team and film crew in the credits appear to be Norse, as the film is set in Finland, I found it odd that they felt the need to constantly massage American egos, given that this is more or should have been, a European film than anything! The plot is quite simple, a little bit of a coming of age story for the young lad, a nice play on the genre, with lots of, slightly predictable, action and a feel good factor. The real person who carries this is the young lad, SLJ simply comes along for the ride and is probably here to make the film appeal to the American market, hence the constant USA Egotism, which at times gets a bit nauseating! I fee that if it weren't for SLJ and the American Ego massaging, this could have been a really good film, if they had concentrated more on the plot and the young lad's adventures, rather than trying so desperately to appeal to an American market!

Big Game is fun -- albeit overly inflated to a point of bursting out – engaging little adventure aimed at fathers and sons (and at the young at heart). Sure, it has its flaws, but most can be overlooked in the grand scheme of things for the sheer sense of wacky inventions director Jalmari Helander tried to, and to a certain point succeeded, to achieve. Overall, it’s an entertaining throwback to a simpler times when action heroes didn’t wear capes, and instead were equipped with either huge machine guns, or packed enough muscle mass to fill the entirety of the silver screen, and more.

The story follows Oskari (played by the charming young lead Onni Tommila), as his father Sapio (on-screen and in real life also, played by Jorma Tommila), sends him on a hunting initiation rite for the boy to prove its worth among the band of senior hunters. During said rite, air force one becomes jeopardized and the president, played by Samuel L. Jackson, through series of events, ends up befriending Oskari as both of them search a way out of the forest. What follows is a bizarre experience for both moviegoers and the involved movie characters, and saying more would spoil the fun.

For those seeking intelligent, in-depth character studies and analysis, this is not the intended piece by any means. The dialog is cheesy (especially back at base) and everyone looks, walks and talks cartoony except Onni Tommila and Samuel L. Jackson. Big Game is in many ways similar to Home Alone, except that it’s outside. The antagonists are being bad guys just for the sake of it, or as Jim Broadbent puts it in the movie: “they only care for money, sex, or God”.

Big Game is a fun ride all throughout, at least if you pre-order the premise that is. For those devoid of imagination and a sense of originality, this movie would probably not work as well as intended. But, as long as you buy the whole silly ordeal, you’re in for a nostalgic trip to the shtick of the 80’s and 90’s action thrills. Unfortunately, Big Game would probably never achieve cult status among moviegoers, probably because the audience is just not that interested anymore in some campy little fun.

To conclude, there is not much else to say about Big Game that hasn’t been said in the previous 20 or so years when describing Schwarzenegger’s acting affairs. Its cartoony physics, logical inconsistencies and plot-holes galore by no means override the campy fun to be had with this one.

As it currently stands, it’s probably fair to give Big Game a chance or two.