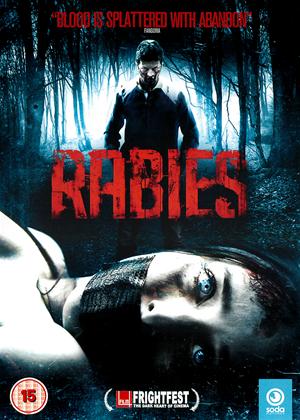 There is a dog, but it doesn't have rabies - hmmmmm - Rabies review by DS

On the face of it Rabies looks like just another film where a group of good-looking teenagers wandering around the woods for some reason, or another end up getting murdered by a serial killer for no obvious reason. And initially we do start off with a rather unpleasant killer but from that point onwards the directors, Aharon Keshales and Navot Papushado, make a good effort of, if not subverting at least bending an old, cliched, and often times, boring genre.

Firstly, the directors set up the main characters giving them each and distinct character type that are based in realism and make you begin to empathise, or not, with them. Rather pleasingly most scenes are shot in broad daylight. It is no spoiler to say we are greeted to some early unpleasant serial killer action but from then on, the story collapses in on itself until you are left with bodies and blood but not in the way you are expecting to get it.

This is the film’s great strength and also weakness because, I can imagine, for some viewers, those that love the full horror of serial killer, kids in peril stories will feel let down by Rabies, likewise those expecting a film about rabies might also be disappointed, but those that like something a bit different with characters that are a little more interesting than cardboard cut-out victims, think more like early darker Coen Brothers, than Rabies might be for them.

The directors have gone for more of an exaggerated view on human nature itself, mistakes and mishaps, a very dark take on confusion and anger. Nothing that happens needs to have happened and could easily have been avoided but instead down on this roller coaster we go and who will make it to the end is anyone’s guess.

The humour is dark and seriously deadpan so do not expect to be laughing out loud from beginning to end but nevertheless there is small vein running through the mine of this film. The gore effects work but are not over the top and excessive. The easy way to judge this is the grue did not bother me but some people I know will be hugely disappointed. The acting is from a group of unknowns (to me anyway) is all good and fairly realistic, I found the bickering amongst the tennis playing teens entertaining and for a change not annoying like some similar set ups. Danny Geva is particularly memorable as the horrible cop Yuval as he channels Matt Damon from Crash, and I also note that Yael Grobglas has now popped up in the Supergirl TV series. Ania Bukstein is an extremely attractive actor so if nothing else I liked looking at her face throughout and I am pleased to report that her looks clearly have no bearing on her casting as she is a great actor. Everyone acquits themselves well though, were not talking Oscar bait but it was all believable and fun, the main idea was to get you to route for a character that you liked, and all the cast do enough for this to be possible.

The directing and pacing are good as the film slowly builds to its climax but not so slowly you get bored or distracted, nothing is perfect, and the film has faults but considering this is Keshales and Papushado’s first film they have made a particularly good effort. There are some interesting shots and set ups including the usual racing tracking shots through the scary woods that is a staple of this type of story. The temptation to go down the usual slaughtering teenagers’ line would have been easier but here at least we get something different. Not entirely different, there are riffs from many films to be found, particularly if you like your horror slashers and dark comedies but it is all done well, the acting is good, and the suspense is fun. You never really know who is going to get ‘it’ and who is not. Afterall the film already tells you that the violence is senseless and has no reason, so characters surviving or not surviving also have the same rules attached.

I will recommend Rabies for the fun and entertainment. Not fully original it is fully fun.