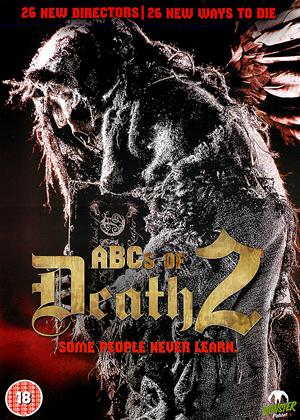 ABC of Death ,the First movie was Brilliant ,a great mix of styles and Directors taking it to a place they work best in... ABC part 2 felt Rushed and second rate .... All the segments were incredibly short ,much shorter than in Part 1 , less interesting and really scraping the barrel for ideas to use . it seemed they had little imagination or used a very short dictionary to find the words to accompany the Alphabet Killings....There is a suggestion of ABC part 3 on its way ...but after this effort is it worth it ? ....NO, I very much doubt it.

Entertaining ....ish. but got rather Boring along the way to be honest ,hoping to see something inspired as before ,but it never appeared.

If you are going to watch it , make it a double feature with something Good, to make the evening feel less like you wasted it .

it makes B Movie grade but you would be really pissed if it was the Main feature you had just paid Cinema prices to see !

After the disappointment that was V/H/S: Viral, I was very much hesitant about delving back into The ABCs of Death. The first anthology film failed to leave much of an impression on me given how most of the directors chose deaths that were either too childish (F for Fart) or too esoteric (V for Vagitus). But part of me was much more hopeful given the quantity of shorts. With 26 different entries, the odds are quite in your favor for a film that plays more like a festival than an anthology. This time I lucked out with a hand of more high cards than duds.

The format remains unchanged. 26 directors/directing groups were each given a letter of the alphabet to direct a short around involving death in some way. Outside of a limited running time, the directors were given free range to create whatever they wanted without interference from either producers or standards. The shorts could be as gruesome or as disturbing as the directors wanted them to be, meaning that if a director received “T” he could easily make it about a toilet. Thankfully, this time around, the directors show much more creativity in crafting their horror-themed segments (along with a significant reduction in the use of scat).

There’s a sufficiently higher amount of comedy in the mix that’s not all juvenile, simple or random. The show starts off strong with “A is for Amatuer” by E.L. Katz. It’s a darkly comedic take on a hitman assassinating from a ventilation duct. But when the seemingly first-time killer makes his way through the vents, they’re filthy tunnels of dust, bugs and loose nails. It’s strangely hilarious watching him kill himself in such a space due to his own stupidity and the climax is just too good to spoil. Animation director Bill Plympton lends his talents with warping faces to “H is for Head Games.” A man and a woman fight with each other as facial features turn into destructive weapons. It’s classic Plympton and just makes me want to dig out all his old shorts. Fans of those old action figure commercials of the 1980’s need to check out “W is for Wish” in which a child’s fantasy for mystical adventure goes horribly awry.

Then there are the uniquely surreal that spark with visual brilliance and subtle writing. “J is for Jesus” takes a twisted approach towards the martyrdom of homosexuals in the name of religion. “K is for Knell” features probably my favorite shot of the entire film. A black liquid causes people to go on a murder spree in an apartment building, witnessed from afar by a woman in her own complex. Watching the multiple murders transpire in each apartment is a very creepy sight especially when they all finish their job to stare directly at the female character spying from her window. And “D is for Deloused” is a very weird bit of stop-motion animation echoing the otherworldliness from the music videos of Tool.

Some of the shorts are surprisingly well-shot with some visually appealing cinematography. “F is for Falling” makes great use of the desert location, favoring slow-motion effectively to display a chain of events that lead to an accidental death. “N is for Nexus” whips around many different perspectives for the eventual convergence of characters that leads to a deadly crash on Halloween. “S is for Split” performs a beautiful dance of overlapping action in the style of 24 with a surprising twist.

Despite some surprisingly engaging pieces, there are a handful of them that are far too base and more deadly in how they beat you over the head with the message. “T is for Torture Porn” doesn’t quite go in the direction I expected, but it’s still rather simple in the way it stages a woman getting revenge on sexist pornographers with tentacle sex. “U is for Utopia” savages you senselessly with how an uniformed society extinguishes the smallest of divergence. And “X is for Xylophone” never surprises past the first shot that you can easily guess the ending within the first few seconds.

The ABCs of Death 2 is a bit of a gamble with its 26 varying shorts, but it plays out wonderfully with far more hits than misses. The directors venture all over the map for varying degrees of horror that mostly hit the sweet spot by never overstaying their welcome. Many are insanely gruesome with the gore and blood, but rarely does the experience become monotonous with its subject. It’s certainly not for the squeamish, needless to say, as there are a few scenarios which are barf-bag worthy just by their descriptions. But the iron stomachs will be served up a tasty platter of gritty delights. I had my doubts after the lesser predecessor, but now I’m feeling lucky for The ABCs of Death 3 to see what the next batch of directors can come up with.