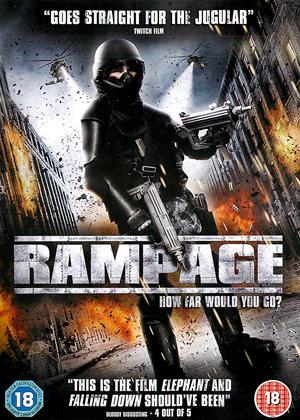 Synopsis:
Bill Hues an uneventful life in a small town. He lives with his parents who are on his case about pretty much everything, he works as a mechanic and has a self-righteous idiot as a best friend. He seems like a decent guy, who loves his parents and tries to be courteous to his fellow man. But there seems to lie something brewing inside him that doesn't feel quite right... One day, Bill puts on some body armour, picks up a couple of machine guns and goes on a killing spree in town, massacring everyone in his way.
Actors:
Brendan Fletcher, Shaun Sipos, Michael Paré, Matt Frewer, Lynda Boyd, Robert Clarke, Malcolm Stewart, Steffen Mennekes, Katey Grace, Laurie Brunetti, Mark Brandon, Julie Patzwald, Katharine Isabelle, Colette Perry, Michaela Mann, Krista Charron, Brent Hodge, Pale Christian Thomas, Eduardo Noda
Directors:
Uwe Boll
Writers:
Uwe Boll
Studio:
High Fliers
Genres:
Action & Adventure, Drama, Thrillers
Countries:
Canada

Since White culture is inherently violent (eg, endless wars for other people's resources), disproportionate mass murder by White people is inevitable. This movie goes some way to explaining the Whys and the Wherefores for all of this - as well as the hows.

Poor parenting leads to attention-seeking children who become narcissistic and sociopathic adults without treatment - from self or others. This film presents few heroes and no preventions nor solutions for a culture dying-out from superficiality and materialism, such that meaning, identity & value have no practical place here.

The police (entirely curative since they cannot prevent people from choosing a life of crime) can only catch criminals after the fact - never before. They are viewed as generally ineffective in the face of the White-on-White crime shown here.

The personal relations between the White characters here are shown as being purely transactional: Give-and-take rather than share-and-share-alike. This lack of genuine personal relationships is caused by a politically-correct obsession with concealing the essentially-political nature of White culture behind a facade of the moral corruption inherent in the Manichean philosophy of "with-us-or-against-us". This inevitably leads to White culture becoming a protection racket for the benefit of White people and against everyone else.

Most of the murders here are not personal; meaning that they are attempts at political scapegoating and, apparently, are the only means of atoning for the baleful affects of a culture largely ineffective at satisfying its adherents psychologically, rationally or even culturally. This is an attempt to allegedly compensate for the parents blaming their children (in their turn, as their parents did them) for their collective failure to create more meaningful lives for themselves.

Money is not the motive for the random killings here, the irrational desire for it is the problem - as exemplified by our anti-hero robbing a bank and then promptly setting the stash on fire in a litter bin just outside the bank's entrance. The director, Uwe BOLL, is clearly suggesting that money is used by White people as a substitute for human value and meaning when it is merely a means to obtaining those things and not just an end in itself.

The apparently senseless violence mirrors the senselessness of White culture with its lack of moral compass or direction. Indeed, the ending explicitly suggests that crime does pay; making this movie a critique of a culture which the antagonist so effectively represents. (More personally, the White sociopathy on display here is also a coded attack by a disgruntled film director against the audience who pays to see Hollywood movies ostensibly like this. Here, BOLL mocks such movies for their restrained and, thus, designedly-enjoyable violence, while that same audience is supposedly being comforted that the central character is really nothing like them - when he so obviously is.)