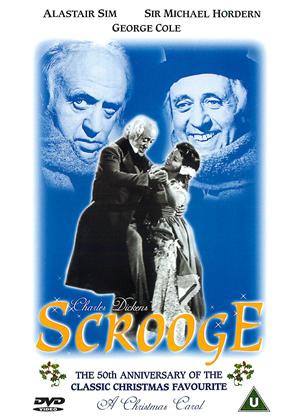 This is a wonderful film. Made before the Queen was on the throne, just after the war, in a real age of austerity, this festive morality tale would have been so relevant too, especially as the whole of Britain was still on rationed food - even bread, which was not even rationed during the war.

A Christmas Carol is BY FAR the best of Charles Dickens; 5 Christmas stories, and is worth reading aloud every Christmas Eve. It helped invent our modern Christmas - and Dickens even includes reference to a Turkey, and not the more usual Goose Christmas dinner of the time. This is a seasonal morality tale that will never age.

Alistair Sim IS Scrooge - the best or maybe the only believable performance I have seen, and there are some dreadful modern versions, all pc and diverse. Yeuck!

The supporting cast are great. The sense of transformation and redemption oozes through every pore of this film. No need for colour - this works SO well in black and white.

The tale of Ebenezer Scrooge is my favourite of all Charles Dickens’ works, and I think, my favourite Christmas story too. I rate this as the best filmed adaption of the book. No punches are pulled in the horror of it all – squalor, sickness, biting snow, poverty, even the rampant toy display longingly stared at by Tiny Tim (Glyn Dearman) in the shop window is a sinister sight: there’s little comfort in the chuckling mannequins and clown-faced dolls.

One of the issues I have with some adaptions is the saccharin attributes poured on the various versions of Tiny Tim. It isn’t enough he is a cheerful lame boy destined to die - for some producers, his sweetness has to be laid on with a trowel. Not so much here, gladly. It is entirely possible to sympathise with his plight without feeling nauseous, although some of the Cratchett family’s delight in simple pleasures threaten to overload the sugar coating at times.

A second issue I have concerns Scrooge himself. This adaption is also slightly guilty of this: Scrooge’s miserable meanness is given scant attention. He sees off a couple of charity workers and a debtor and that’s about it. I wish we had been given more of his latter-day nastiness – as it is, we’re soon given Michael Hordern’s exceptionally creepy Ghost Of Marley and Scrooge’s repentance begins. His self-doubt and burgeoning goodness would mean so much more if he’d been shown to be a cruel, miserly old man for longer.

But what do I know? Alistair Sim is exemplary in the role, adding touches of humour to Ebenezer, even at his meanest – and perhaps if he had been too cruel, we’d find it harder to forgive him. Sim’s is the definitive Scrooge. His words of admonishment to Bob Cratchett for wanting ‘the whole day off’ on Christmas Day are pertinent even in 2018, and what a disgrace that is. Employees often aren’t given the choice about working on December 25th, for fear of lessening the yearly company profit, and that shows no sign of changing. At least Scrooge has the decency to be miserable about it.

This is a beguiling, atmospheric adaption, with an amazing central performance from Sim and is recommended viewing any, or even every, Christmas.