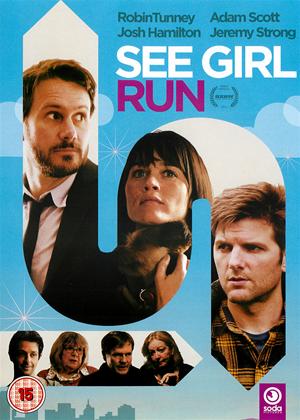 Entering her early forties Emmie (Robin Tunney) finds herself dissatisfied with her marriage and dog grooming business; following an attempt to join a reality show that reunites high school sweethearts years after graduation she decides to return to her hometown to see if anything still lingers with her old flame.

Upon reaching the small unpronounceable town in Maine Emmie learns that her ex, Jason (Adam Scott) is working as a waiter in a lobster joint whilst waiting for his art career to take off and in the usual tone of the bittersweet indie-film-come-extended-acoustic-guitar-music-video we can’t help but be charmed by that special combination of heartthrob and loser.

With a slightly tongue in check attitude to the traditions and tropes of the Hollywood rom-com See Girl Run is a sweet and reasonably thought provoking drama about happiness and perception. Unfortunately I couldn’t help but feel that the film was aiming a little higher than it could really reach; the observations of Emmie’s depressed brother Brandon (an interesting performance from Jeremy Strong) come across as a little obtuse at times whilst her own dissatisfaction with her marriage could probably be solved by adding a little spice to their physical relationship – yet we solider on and overall it’s an enjoyable experience.

The true genius of See Girl Run comes in the development, or rather redevelopment, of Emmie and Jason’s relationship; despite spending almost no time together during in the film the couple resonate that fun, spontaneous and shiny love that only exists before the age of thirty. The microscope through which Brandon inspects the happiness (or lack thereof) of those around him is juxtaposed against the over-the-top and grandiose gestures Jason presents as love, whilst the genuine marital problems of Emmie’s parents highlights the over romanticised expectations Emmie holds for her own marriage; and yet with the sands of the film’s runtime quickly disappearing Emmie is still to decide where her heart truly lies.